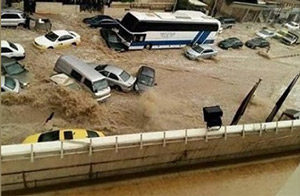 Water from heavy rains caught high school students and their teachers visiting hot springs near the Dead Sea, on its Jordanian side, the Israel Broadcasting Corp. reported Thursday. Along with the fatalities, 35 people were injured.

Israel’s military said it dispatched a search-and-rescue team at the request of Jordan’s government. Several helicopters from the Israeli Air Force’s elite search-and-rescue Unit 669 were sent across the border, the army said.

The Jordanian request for assistance came at a sensitive time for the relationship of the two countries. On Sunday, Jordan formally notified Israel that it would not renew a land lease deal for an area where Israeli farmers have large plantations. The deal, which had a 25-year expiration date, was part of the 1994 peace agreement between the nations.

Israel, which has advanced desalination and water recycling capabilities, supplies drought-stricken Jordan with water in greater quantities than those mandated by the same agreement. Jordanian officials are upset over Israel’s failure to meet deadlines for a joint desalinization project in Aqaba, Ynet reported this week.

“At this time, the soldiers are assisting in the search and rescue efforts for the missing and are doing all they can, despite the weather conditions, to assist the survivors in the flood area,” The Times of Israel quoted an Israel Defense Forces official as saying.

Separately, a 4-year-old boy was killed in flash flooding in Israel’s northern Negev Desert, near the Bedouin town of Kuseife where his family was living. Rescuers pulled him from the water but were unable to resuscitate him, the Magen David Adom ambulance service said.

The Dead Sea, the lowest point on the earth, is surrounded by steep valley slopes that frequently witness flash floods and landslides.