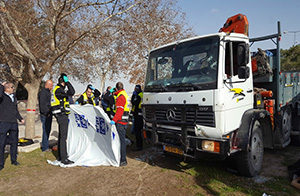 JERUSALEM (JTA) – Israel has filed a civil lawsuit against the wife and young children of a Palestinian terrorist to recover the cost of his attack in Jerusalem.

The suit filed last month by the Jerusalem Prosecutor’s Office over the January attack is expected to be the first in a number of lawsuits expected to be filed against the families of Palestinian terrorists, Haaretz has reported.

Called “precedent-setting” by Haaretz, the suit was filed against the estate of Fadi al-Qanbar, 28, who killed four soldiers in a truck-ramming attack in eastern Jerusalem on Jan. 8.

It calls for $572,000 in compensation to the families of each soldier killed, reimbursement for each of their funerals and headstones, and for the benefits paid by the state to the soldiers’ families. The soldiers were aged 20 to 22.

“This lawsuit, which stems from a terrorist incident in which soldiers were murdered, is designed to recover the expenses incurred in events of this kind to the state’s coffers, as well as sending a clear message that the state will also settle accounts on a civil level with the perpetrators of hostile acts,” the Jerusalem Prosecutor’s Office said in a statement, according to Haaretz.

Qanbar rammed his truck into a group of cadets in an officers’ training course who had just gotten off a bus on the promenade in the Armon Hanatziv neighborhood. Soldiers shot and killed Qanbar.

The Israeli military also has sealed off the family home and revoked the Jerusalem residency permits of 10 family members.