Israel to give $60 million to COVID-19 vaccine research 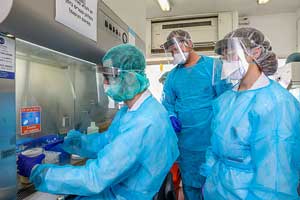 Technicians carry out a diagnostic test for coronavirus in a lab at the Rambam Hospital in Haifa, on March 30, 2020. Photo courtesy of Yossi Aloni/Flash90.

By AARON BANDLER
(Jewish Journal via JNS) – Israeli Prime Minister Benjamin Netanyahu announced on Monday, May 4, that the Israeli government will provide $60 million toward efforts to develop a COVID-19 vaccine.

Netanyahu announced the pledge in a pre-recorded video during a European Commission-hosted virtual marathon to raise money for the World Health Organization, Bill and Melinda Gates Foundation and other organizations worldwide working on a vaccine.

“Global plague eradication requires global partnership,” said Netanyahu. “Israel, like all countries, was significantly affected by the plague. Fortunately, the number of victims we have so far is relatively low. This is the result of early action to stop the virus, advanced technology used to track those infected, first-rate medical experts and a disciplined population that largely obeyed the government’s containment policy.”

Must Work Together!
He acknowledged that while Israel and other countries are starting to reopen their economies, the pandemic can only truly end when a vaccine is developed.

“We must all work together on improving diagnostics, accelerating therapies and ultimately developing a vaccine,” he said. “I am confident that Israel’s leading research institutions, its world-renowned scientists and our unique culture of innovation can enable us to play an important role in advancing solutions on all three fronts.”

100 Vaccine Projects
Various Israeli institutions have been making progress on developing a vaccine. The Galilee Research Institute (MIGAL) is reportedly in the final stages of developing its vaccine and the Israeli Institute for Biological Research has been testing its on rodents. On April 19, Tel Aviv University professor Jonathan Gershoni obtained a patent from the U.S. Patent and Trademark Office for a COVID-19 vaccine; he estimated at the time that he was two-thirds of the way toward completing it.

There are dozens of companies around the world working toward developing a vaccine and reportedly at least 100 vaccines in the pipeline. Eight are reportedly in human trials, including two in the United States.

This article was first published by the Jewish Journal.