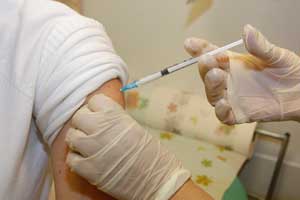 An illustrative photo of a patient receiving a measles vaccine in Israel. photo courtesy of Miriam Alster/Flash90.

By MARCY OSTER
JERUSALEM (JTA) – Researchers at an Israeli government center say that tests of a coronavirus vaccine have been successful on hamsters and the vaccine could be ready by the end of winter if human trials are allowed in the coming weeks.

The country’s Ministry of Health must approve the start of the human trials by the Israel Institute for Biological Research, Israel’s Channel 12 News first reported.

The vaccine developed at the institute in central Israel uses a VSV virus, which does not cause the disease in humans, according to the report. The VSV virus uses genetically engineered proteins that make up the crown of the coronavirus, and when the body identifies the fake coronavirus it begins to manufacture COVID-19 antibodies.

None of the hamsters that received the vaccine became sick with the coronavirus, according to the report.

The report noted that a vaccine being developed at Oxford University could be approved for use in specific cases as early as October, and one being developed by the American biotech company Moderna also is promising.

Israel has signed a deal with Moderna to purchase its vaccine should trials be successful, Prime Minister Benjamin Netanyahu announced during a meeting of the government’s so-called Coronavirus Cabinet. No details on the deal were released.