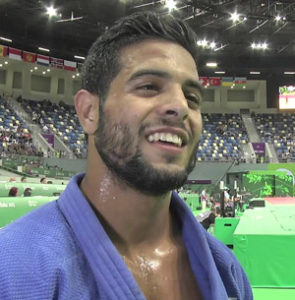 JERUSALEM (JTA) — An Israeli judoka won a gold medal and three others took bronze in the recent  European Senior Judo Championships. The tournament was held this year in Tel Aviv.

Sagi Muki won a gold medal on the first day of competition in the half-middleweight division, 73 kg – 81 kg. He defeated Sami Chouchi from Belgium for the gold. Muki also won a gold in the 2015 championships and had been considered a favorite to win a medal at the 2016 Rio Olympic Games. Injured with two slipped discs in his back, he made it to the semi-finals in Rio before losing.

Tal Flicker won the bronze in the under-66 kg weight category after defeating Marko Gusic of Montenegro, and Gefen Primo won a bronze medal in the women’s under-52 kg weight-class, after defeating Irem Korkmaz of Turkey.

The next day, Peter Paltchik won the bronze in the 100-kilogram men’s division after defeating Russia’s Niiaz Bilalov.

Muki sang loudly as the Israeli flag was raised and the country’s national anthem was played in honor of his gold medal.

In October, organizers of the Grand Slam tournament in Abu Dhabi refused to play Israel’s national anthem when Tal Flicker won a gold medal. Flicker was wearing an International Judo Federation uniform and received his medal under an IJF flag while the anthem of the federation was played. But video clips showed Flicker singing what appears to be the Israeli national anthem, “Hatikvah.”