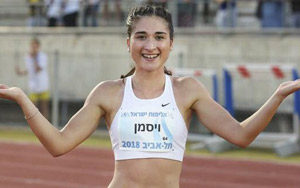 JERUSALEM (JTA) — An Israeli sprinter broke her country’s women’s record in the 100 meters set at the 1972 Munich Olympics.

Diana Vaisman, who will be 20 at the end of the month, ran the race in 11.38 seconds last week at the Israel Athletic Championship in Tel Aviv to beat the time of 11.45 by Esther Roth-Shahamorov.

On Facebook, Vaisman wrote: “New national record! After 46 years, it was my turn, my opportunity and finally I did it. It’s hard to express all the feelings and to show how excited I am, but now I’m just looking forward and getting ready for my next challenge.”

Roth-Shahamorov said after the race that “A burden has been lifted off my shoulders,” The Jerusalem Post reported.

She told Vaisman at the finish line: “You chose to do it here. Based on what I see, you can still improve. You have the legs to do it. Now give it everything you have in competition.”

Vaisman, of Ashkelon, is serving in the Israeli army.

The world record for women in the 100 meters is 10.40 set by American sprinter Florence Griffith-Joyner in 1988.

At the ’72 Olympics, 11 Israeli athletes and coaches were killed by Palestinian terrorists in what has come to be called the Munich Massacre.