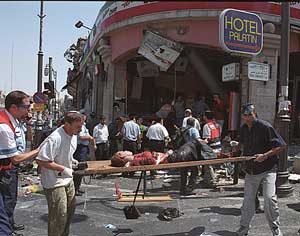 The aftermath of the suicide bombing at the Sbarro pizzeria in Jerusalem on Aug. 9, 2001, that killed 15 people, including two Americans, and wounded around 130 others. Photo courtesy of  Flash90.

By AKIVA BIGMAN
(Israel Hayom via JNS) – A group of more than a thousand Israeli victims of Palestinian terror attacks on Monday. Dec. 30, filed an NIS 20 billion ($5.78 billion) lawsuit against the Jordan-based Arab Bank PLC at the Jerusalem District Court, claiming that the bank cooperated with, supported, assisted, funded and encouraged terrorist acts that killed hundreds of people.

This is the first time a bank has been sued in Israel for alleged involvement in financing terrorism, although victims of terrorism have filed suits in the country against both the Palestinian Authority and Hamas. The Israeli lawsuit follows a similar one filed in the United States in 2004, which was resolved last year through a settlement that paid out some $1 billion to victims of terrorism.

The Israeli lawsuit was filed in the names of the Israelis who were left out of the U.S. suit and is seeking compensation for special damages, punitive damages and future damages. The U.S. Supreme Court ruled in 2018 that foreign businesses cannot be sued in U.S. courts by foreign victims of human rights abuses and extremist attacks.

The Arab Bank is one of the largest banking institutions in the Arab world and operates some 600 branches internationally, in addition to subsidiaries. The lawsuit claims that the bank, its employees and its managers played an integral role in the system that supported terrorist activity and even knowingly—if indirectly—provided assistance by funding actions carried out by Palestinian terrorists and terrorist organizations.

According to the plaintiffs—1,132 Israeli citizens who were wounded in terrorist attacks or who lost family members to terrorist actions committed within the Green Line as well as in Judea, Samaria, and the Gaza Strip from 1995-2005—the bank was involved in funding terrorist attacks carried out in Israel by Hamas, Fatah, the Palestinian Islamic Jihad and other Palestinian terrorist groups during those years. These attacks claimed the lives of hundreds of Israelis, and wounded thousands.

The bank is accused of playing a significant role in collecting donations to support the families of suicide bombers, wounded terrorists and Palestinians serving sentences in Israeli prisons for terrorist activity. The bank even disbursed the money in violation of accepted banking practices, the lawsuit claims.

The lawsuit also claims that the bank was more directly involved in supporting terrorism, and that at the outbreak of the second intifada in 2000, bank chairman Abd al-Majid Shuman established the Fund to Support the Palestinian People’s Resistance, which was designed to support the intifada. Shuman promised to donate $500,000 of his own money to the fund, and the bank committed to an additional donation of $2 million.

The lawsuit is being filed by attorneys Gilad Markman and Benjamin Perlman, as well as attorneys Gil Maman and Gavriel Mairone, whose firm specializes in pursuing legal action against terrorist funding, genocide, and crimes against humanity.

Jewish groups and lawmakers laud legacy of John Lewis after pancreatic cancer diagnosis
A Chasid’s response to the Monsey attacks; Nuanced debate about what comes next.