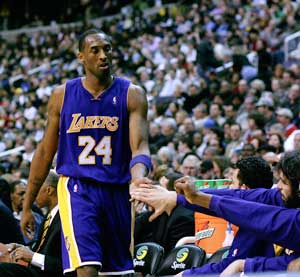 Former NBA star Kobe Bryant died in a helicopter crash, along with his daughter and seven others, on Jan. 26, 2020. Photo courtesy of Wikimedia Commons.

(JNS) – Following the news that famed NBA player Kobe Bryant died on Sunday in a helicopter crash in California, Israeli Prime Minister Benjamin Netanyahu tweeted that the 41-year-old was “one of the greatest basketball players in history,” and called his death “a sad day for all sports fans in the world.”

The Israeli foreign minister also sent condolences “to his family and the NBA family.”

Bryant, his 13-year-old daughter Gianna and seven other passengers on board all died when the helicopter crashed in a hilly terrain just outside Calabasas, Calif., sparking a brush fire.

The cause of the crash remains unknown, though weather was likely a contributing factor since fog in the area was so bad that the Los Angeles Police Department grounded its helicopter fleet on Sunday morning, the Los Angeles Times and CNN have reported.

Israeli basketball fans paid tribute to the late NBA player on Sunday night jan, 26, during a Maccabi Tel Aviv vs. Hapoel Tel Aviv match when they stood up and in unison chanted “Kobe Bryant.”

Israeli NBA star Omri Casspi tweeted that he was “speechless,” while former NBA player Amar’e Stoudamire, who now plays in Tel Aviv, said he was “shocked.”