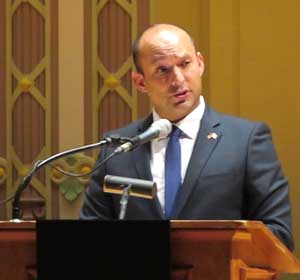 By YAAKOV LAPPIN
(JNS) – Israel must take a series of immediate steps that would enable it to end its nationwide closure and enter a new “corona routine” that would revive the economy and that could begin immediately after Passover, according to Interim Defense Minister Naftali Bennett.

Country Needs Exit
In a new national response plan that he recently published, Bennett wrote that “the State of Israel saw the danger early and took a series of correct decisions that revolved around ‘closing Israel.’ On one hand, this bought us precious time, but on the other, it had a terrible economic effect. Millions of Israelis lost the source of their income in the past month. They and their families face a double existential anxiety: being infected, and being unable to pay bills and support their families. Many businesses and companies are closing every day.”

Instead of continuing with the national lockdown without a clear exit point, Bennett said that “there are a number of critical actions that have not yet been taken in Israel,” adding that failing to take them now would deal a mortal blow to the economic future of millions of Israeli citizens, employees and business owners in the private sector.

Success Elsewhere
He pointed to the success of countries in stopping the pandemic without destroying the income of their citizens, such as South Korea, Germany, Singapore and Taiwan, adding that “we must learn from them and adapt” their measures to Israeli conditions.

To achieve this, explained Bennett, Israel must transition from closure to a “focused and consistent effort to track the carriers and isolate them; conduct pinpoint treatment of cluster points; closely protect the elderly and vulnerable population; and increase the capacity of the health-care system to absorb thousands of patients in critical condition.”

“If we act immediately, the State of Israel can exit the corona economic crisis immediately after Passover, reopen its economy in a supervised manner and return most of the workers to their jobs, while entering a reasonable corona routine for the coming year until we overcome the pandemic,” he argued.

At  press time the number of confirmed coronavirus cases in Israel was 5,591 with a death toll of 21.

Isolation For Vulnerable
For his plan, Bennett outlined a strategy in which Israelis would gradually return to work and studies, beginning with younger people, before releasing older members of society (not including the high-risk group).

The elderly and vulnerable would remain in isolation during this period and have all of their physical and mental needs cared for by the state, he said. “Anyone who has a sore throat or fever turns to their family doctor as usual, who refers them to a corona test. Those found to be positive go to the hotel recovery centers. Their relatives, friends and colleagues are immediately checked. When a cluster is found, say in an office building or neighborhood, it is closed off immediately for a few days; we check all of the people in the area, find the carriers and send them to isolation.

“After a few days, we reopen the area,” he continued. “This is the way in which we maintain a low-level spread until either a medicine is found or most of the Israeli public is infected, recovers and will be immune.”

Bennett said that such a routine would not be pleasant, but “it isn’t terrible and it’s not a closure of Israel. I estimate that in less than a year, the corona event will be behind us.”

A New Routine
Similarly, National Security Advisor Meir Ben-Shabbat said in a briefing to Cabinet ministers that the government may slowly ease restrictions after Passover. However, he cautioned that it would be a “slow, careful and gradual” return to a routine that is “entirely different from anything we knew before.”

In a video press conference, Bennett said that Israel has one of the lowest coronavirus fatality rates in the world, and that although spread is continuing, the scope of severe cases and fatalities is lower than in all of the major countries affected by the pandemic.

Bennett also raised Netanyahu’s recent decision to instruct the Ministry of Health to reach a 30,000 PCR test capacity per day for detecting people who are infected. The Health Ministry is currently conducting 10,000 PCR tests a day.

IDF Control?
To reach the 30,000 level, Bennett said, there is no alternative but to order the IDF and the defense establishment take over and establish a strong national testing system, and to have them lead the logistics and centralized data efforts. “They are the most qualified to manage systems during an emergency. A pandemic is a mix between medicine and war. We have to combine many disciplines,” he maintained.

The defense establishment is in the best position to create mass testing facilities, such as drive-in centers, and to get the samples to lab on a mass scale. “We have already built a new information system to deal with corona,” added Bennet, outlining a data system designed by the 8200 signals intelligence unit, which at any given moment would give all Israeli citizens a 1-to-10 score on their likelihood of being infected and infecting others.

The score would change in real time as data about a citizen’s movements and area are updated. If they walk into a grocery store within a day of a confirmed carrier visiting the store, their score would rise to 9 or more, requiring a corona test. The system would be powered by artificial intelligence.

Bennett called on the government to adopt the system immediately and place it under full civilian government supervision.

“The private sector is in terrible distress. People have been fired, yet no one has canceled their council tax, rent or need to buy food. People are breaking into savings. They are in terrible fear,” he said. “We have to lift this from over their heads.”

The story that Jews repeat on Passover is the secret of their survival
‘If Gazans start dying, we will make 6 million settlers unable to breathe’