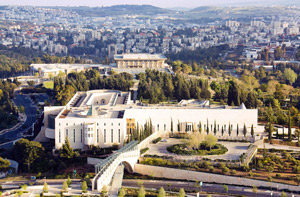 View of the Supreme Court Building, with the Knesset building visible in the background

By JONATHAN S. TOBIN (JNS) – On Sunday, the Israeli Supreme Court handed down the final rulings on who could run in the country’s April 9 Knesset elections. The Central Elections Committee set up by the Knesset had previously decided that members of Otzma, whose leaders are disciples of the late Rabbi Meir Kahane could run in spite of accusations that they were guilty of racism. The Committee had banned the appearance on the ballot of one of the Arab parties running—the Balad-United Arab List—as well as one of the candidates for Hadash-Ta’al, the other Arab coalition seeking votes. But the court, which has the final say, overturned their decisions by banning Michael Ben-Ari of Otzma while ensuring that both Arab tickets and all of their candidates could remain on the ballot.

This infuriated many on the Israeli right—and caused many on the left to sing the court’s praises as the country’s savior of democracy. But in spite of the fact that Netanyahu was responsible for helping to broker the merger of right-wing parties that made it likely that a member of Otzma will enter the Knesset, this latest upset will wind up helping him.

How is that possible?

Getting rid of Ben-Ari means there’s a good chance no one from the party will be in the next Knesset. Since the Jewish Home Party with which Otzma merged would now need to win seven seats in order to get the next one of their members into the Knesset, the Likud may still reap the fruits of consolidating the right-wing vote while being spared the embarrassment of having enabled the entry of a follower of Kahane into the legislature.

But it also helps Netanyahu and his allies because it reminds voters of an issue that angers and motivates them to turn out. If there is any issue that unites those who support the current center-right coalition, it is outrage at an activist Supreme Court that is prepared rule in any way it sees fit, regardless of the letter or the meaning of the laws that it is supposed to enforce.

Runaway Court?
For the latest three decades, the high court has consistently foiled the efforts of the Knesset and the various governments of the day to do as they liked on security and other issues. In theory, that sounds right since in any democracy an independent judiciary is necessary to act as a check on both the legislative and executive branches. But rather than enforce existing laws, the Israeli Supreme Court has largely sought to make new laws of its own when they wished to frustrate the desires of the Knesset. Nor does the Knesset—and by extension, the voters—have the kind of input on the court’s composition that the U.S. Senate has over the U.S. Supreme Court.

There are times when the court seems to think that it is a super legislature making decisions on the basis of what it believes is expedient or right, often eschewing its role as an impartial referee enforcing the law. The ruling on who may run for the Knesset is a perfect example.

The basis for exclusions is a law passed in the 1980s that targeted Kahane, who had won election to the Knesset in 1984. In order to ensure he wouldn’t be re-elected in 1988, the Knesset passed a law banning racist and anti-democratic parties.

Other Offenders
The same argument was made this year to eliminate Otzma’s candidates because they engaged in Kahane-style incitement against Arabs. Ben-Ari, like his mentor, overflows with hatred of Israeli Arabs.

But the problem with having such a law is that the Kahanists are not the only people who can be credibly accused of being racist or anti-democratic. Strong arguments can be put forward that all four Arab parties (the Communists of Hadash, the Islamists of Ra’am, and the two secular nationalist Balad and Ta’al) are either racist or anti-democratic. More to the point, they all also run afoul of the provision that bans parties whose goals are antithetical to Israel’s founding principles.

Banning any or all of those four of those parties (who ran together as a Joint List in the last two votes, but are now running as two separate coalitions this year) would be undemocratic and a public-relations disaster for Israel since it would essentially disenfranchise the Israeli Arab minority, who enjoy equal rights under the law in spite of the fact that the primary purpose of Israel is to defend the rights of the Jewish people.

High Court Inconsistent
But while we can be grateful that the high court realized that enforcing a law allowing the banning of those parties would have been wrong, its decision to use it against Ben-Ari was inconsistent and hypocritical.

The Knesset is better off without any Kahanist sitting in it. But that is for the people to decide, not judges. One can argue that nations must defend themselves against anti-democratic elements. But keeping a racist member out of the Knesset doesn’t defend democracy. It undermines it by allowing such people to claim that the system is rigged, especially when the same standards are not applied across the board to Arabs who also have said hateful things.

The lack of a written constitution has sometimes forced the court to step in where the law offers no guidelines. But if Israel’s judges want to make up for that shortfall, they should try imitating America’s First Amendment traditions of free speech, as opposed to giving themselves the privilege to decide who may or may not exercise their rights.

A court that applies such double standards undermines respect for the rule of law. That’s why many Israelis believe that it must be reformed. Far from protecting the Jewish state against the barbarians at the gate, as its defenders claim, this arbitrary ruling has further discredited the Israeli Supreme Court.

Jonathan S. Tobin is editor in chief of JNS‑Jewish News Syndicate. Follow him on Twitter at: @jonathans_tobin.

Why President Trump’s tweet on The Golan Heights is important
2 arrested, gang identified in attack on Argentina’s chief rabbi