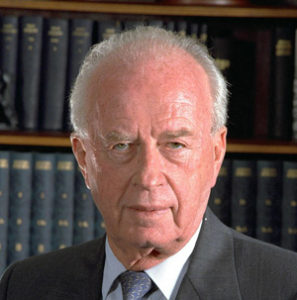 By ANDREW TOBIN
TEL AVIV (JTA) – Israeli Prime Minister Yitzhak Rabin’s assassination will be memorialized differently this year. The new organizers of the annual rally on Nov. 4 in the Tel Aviv square where Rabin was killed have shifted the focus from denouncing hatred and advocating peace to promoting national unity. Many Israelis have welcomed the changes, but some on the political left say the new approach is an attempt to whitewash the national tragedy.

Two advocacy groups that urge “separation” from the Palestinians as part of a two-state solution took over the rally this year. The Darkenu movement and Commanders for Israel’s Security urged Israelis to turn out under the banner “We Remember: We Are One People.”

Advertisements in the media touted the rally as an an inclusive and forward-looking demonstration, saying “On November 4, we will stand together, all Israelis from all corners of the country, and we will strengthen the unity of the people, moderation and Israel’s secure future —for the eternity of the nation-state of the Jewish people in Israel and the diaspora, a democratic state in the spirit of the principles of the Declaration of Independence.”

“Finding Our Path”
One of the organizers, Nimrod Dweck, the chief strategist and co-founder of Darkenu (the word means “our path”), spoke to JTA.

“There was a sense that we need to reinvent what makes us a nation,” he said. “It’s very different from past years because we don’t play the blame game or talk about peace. We talk about who we are as a people.”

Right-wing extremist Yigal Amir shot Rabin to death on Nov. 4, 1995, at the end of an event the then-prime minister held to demonstrate public support for his efforts to make peace with the Palestinians. In the following days, and every year since on the Saturday nearest to the anniversary date, thousands of Israelis have gathered in the square where the assassination took place to honor Rabin.

The rally, which has become the main commemoration event for Rabin, has long been organized by an alliance of youth groups and social organizations. But last year the alliance opted to instead hold round-table discussions in Tel Aviv, Jerusalem and Haifa. The Labor Party, part of the Zionist Union, stepped in at the last minute to save the rally from cancellation.

No Politicians
Unlike in past years, no Israeli political parties or lawmakers were invited to speak at the rally. The six living former chiefs of staff of the Israel Defense Forces received invitations. But after all expressed interest, they declined one by one. Israel’s Channel 10 TV station reported that they feared being tagged as leftists for their association with the organizers. Dweck said he did not know their motivation.

Darkenu emerged from V-15, a group also co-founded by Dweck that sought to oust Prime Minister Benjamin Netanyahu in the 2015 election.

Dweck said that by eschewing politics, the organizers have been able to attract Israelis who would have felt unwelcome in the past. One of the speakers this year will be Esther Brot, who left her home in the West Bank settlement of Ofra out of respect for the High Court of Justice’s ruling that it must be demolished because it was built on private Palestinian land. Another speaker will be Tel Aviv Deputy Mayor Mehereta Baruch–Ron, who immigrated to Israel from Ethiopia as a child.

Yehuda Glick, an Orthodox Jewish lawmaker in Netanyahu’s Likud party, sent a letter Monday, Oct. 30, to the Knesset encouraging his fellow lawmakers to attend the rally. He said that he was “ashamed” by the politicized atmosphere of last year’s rally, when speakers scored the right and demonstrators heckled the left. But Glick said he was convinced Darkenu and Commanders for Israel’s Security would create a different atmosphere.

Nonpartisanship Alienates Leftists
“I personally spoke to the organizers of the rally and was convinced they were going above and beyond to preserve a dignified and stately atmosphere,” he wrote. “The slogan chosen for the ‘We Are One Nation’ event expresses the public’s strong desire to heal the rifts within us, and the organizers seek to create as broad a common denominator as possible against the violence and hatred that destroys every good part of the Knesset.”

However, the avowed nonpartisanship of the event upset some Israeli leftists, who said Rabin’s assassination was inherently political and should be remembered as such. They also pointed out that the advertisements did not mention that Rabin was assassinated.

“A foreigner reading that weird, misleading ad might think that Rabin died peacefully in bed, after retiring, and now the gang is getting together to have a little sing-along and share fond, amusing memories,” lawmaker Shelly Yacimovich of the center-left Zionist Union political alliance wrote on Facebook. “Well, prime minister and defense minister Yitzhak Rabin was murdered. M-u-r-d-e-r-e-d. It was a political assassination designed to eliminate an elected political leader and to change the path of the nation by that murder.”

Responsibility To Remember With Respect
She added that the assassination should be taught to everyone, not just those in Rabin’s “political camp,” but the advertisements did the opposite.

“This ad denies that memory to everyone —erases it, whitewashes it and hides it,” Yacimovich said. “It’s an embarrassing ad that reeks of fear. There’s still time until the rally to recover and remember.”

Many other leftists shared similar criticism.

Dweck said members of the Israeli left were having a hard time letting go of their anger at the right—especially the settlement movement, some of whose leaders incited against Rabin and helped inspire Amir. Since Rabin’s death, the Israeli public’s faith in peace with the Palestinians has dwindled and the country’s politics have shifted rightward. But Dweck said he still expects leftists to show up at the rally.

“Everyone here wants peace and security and better lives,” he said. “We just have to respect one another and understand each other’s challenges.”

Itamar Rabinovich, a self-described centrist who served as Rabin’s ambassador to the United States and chief negotiator to Syria, said both the left and the right held some responsibility for the bitter atmosphere surrounding the rally, which he said has existed from the beginning.

“I feel sorry that mostly the religious Zionist camp has not gone through the soul searching it should have gone through immediately in the aftermath of the assassination,” he said. “I also think the left has been mistaken in seeking to turn the principal commemoration at Rabin square into a political statement.”

Rabinovich said the challenge was to make the rally an event that reflected the national consensus without making it meaningless.

“I personally think the organizers have struck the right note,” he said.