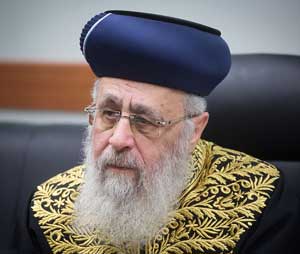 At a recent rabbinical conference in Jerusalem, Rabbi Yitzhak Yosef criticized Israel’s Law of Return for granting citizenship to Russians who are not Jewish according to Orthodox religious law, the Yediot Acharonot daily first reported Tuesday, Jan. 7.

The rabbi accused the state of deliberately inviting immigrants from the former Soviet Union to Israel in an effort to weaken the political power of the haredi Orthodox public.

“Tens or hundreds of thousands of Gentiles have come to Israel as a result of this law. Gentiles who vote for all sorts of anti-religious parties,” Yosef said.

Israeli politicians and progressive religious leaders called for Yosef’s resignation, but Yosef said in a statement to Israeli media that his words had been “distorted.”

“I was clear and I say again: Alongside the majority of the welcome aliyah of hundreds of thousands of Jews from the former Soviet Union … there is a minority of immigrants who are not Jewish according to Jewish law who came due to the Law of Return,” Yosef said. “During my visits over the last month to the blooming Jewish communities in Russia and Ukraine, I was exposed to the strong criticism within those communities regarding the act of bringing many who aren’t Jewish to Israel.”

Prime Minister Benjamin Netanyahu called Yosef’s remarks “outrageous” and said the immigrants from the former Soviet Union are a “huge blessing to the State of Israel and the Jewish people.”