It is the season for Jewish unity! 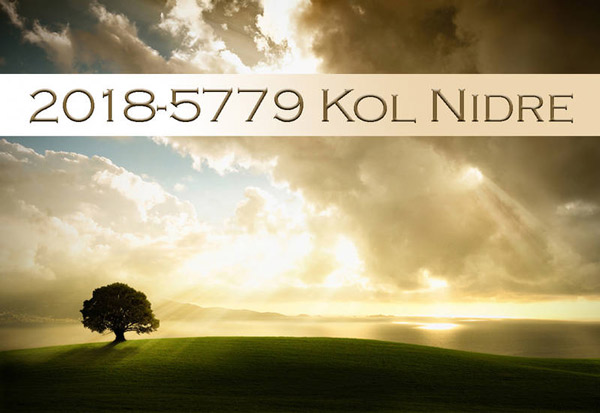 By MOSHE PHILLIPS and JOSHUA GOLDSTEIN
It can be claimed that no single day in the Jewish liturgical calendar is clearly meant to showcase the unity of the Jewish People than Yom Kippur. And during Yom Kippur no single service symbolizes that unity more than Kol Nidre. A short declaration made with a call that we all stand together is made near the start of the service:

We Are Family
“By the authority of the Court on High and by authority of the court down here, by the permission of One Who Is Everywhere and by the permission of this congregation, we hold it lawful to pray with sinners.”
So, all Jews, regardless of the religiosity and regardless of their mistakes are all to stand together, in prayer together, as one, united congregation at Kol Nidre.
And if that is not clearly a goal of the day than why are so many of the pronouns used in the liturgy in the plural? “We” and “Our” including the well-known, and beloved, Avinu, Malkenu (Our Father, Our King) prayer. We are each praying for ourselves and for each other: for all Jews, erverywhere in the world.
Also on Kol Nidre night we plead: “May all the people of Israel be forgiven, including all the strangers who live in their midst…”

A Challenge
We in Herut North America, as part of the Herut World Movement, conduct a “Jewish Unity Challenge” that comes to mind again as we celebrate the High Holidays. This “Challenge” is a personal call to all Jews, including you, to start reaching out across the aisle — to create one united Jewish people. Just because Jews come from many different backgrounds and hold different beliefs, doesn’t mean that we cannot show love and respect for one another.
Our diverse types, colors, and traditions should be seen as a strength for all of us, rather than foster exclusivity, elitism, selectiveness and even superiority.
Ahavat Yisrael — the unconditional love of our fellow Jews — should not be seen as some unattainable dream. In our time, we can make it a reality. We should not have to rely on the threat of anti-Semitism and impending dangers affecting Israel as the only things.

We Need To Talk
The lack of love and unity was considered by the ancient Jewish sages of the era of the Mishnah to be the root cause of the destruction of the Second Holy Temple in Jerusalem. The Temple that we plead with God to allow us to rebuild throughout the High Holidays. If we can re-introduce ourselves and start the process of accepting one another, in the spirit of Ahavat Yisrael, we can again grow as individuals — and as a collective nation.
The Jewish Unity Challenge is designed to spark a conversation between the diverse types of Jews, so that we can achieve greater things for the State of Israel and the Jewish People.
It is time to put aside differences that we may have with other Jews, and focus on the wonderful, time-honored things that unite us as Jews. This is your individual challenge. And this is our collective challenge as a community.

Responsible For Each Other
What we are talking about is simple, yet we call it a challenge because it is not so easy. When it comes down to it, many of us have a knee-jerk reaction to leaving our comfort zone. It is time to look at the bigger picture, to let go a little, and to reach across the table.
The High Holidays may force us to re-examine our biases and to change our thinking.
The Herut World Movement is dedicated to the values of Ze’ev Jabotinsky (1880-1940), who was a key leader of world Zionism before World War Two; he was a mentor of Menachem Begin, and a champion of Jewish unity. And in Jabotinsky’s honor, we conduct this campaign.
Let us discuss what we believe may be best for Israel and the Jewish People. Let us argue, but as we discuss these opinions and we must remember that all Jews are responsible one for another — no matter our backgrounds, beliefs, colors, etc.
Late last year we marked the 30th anniversary Freedom Sunday for Soviet Jews. That December 6, 1987 rally saw more than a quarter million American Jews unite on the National Mall in Washington, to stand up for Soviet Jews at what was the single largest gathering of Jews in U.S. history.
In decades past U.S. Jews instinctively knew that High Holiday period was the time to concentrate on Jewish unity.
On Oct. 6, 1943, three days before Yom Kippur, 400 rabbis marched in Washington, D.C. to call for Allied action to save European Jews. Organized by Jabotinsky movement activist leader Hillel Kook (under his pseudonym Peter Bergson) it was the only effort of its type during the Holocaust in the America.
Later in the 1960s, 1970s and 1980s an annual “Simchat Torah Rally for Soviet Jewry” was organized throughout the U.S including in Philadelphia and Washington, D.C. For example, in 1968 and 1971 rallies were held at the Washington Monument. In 1973 a memorable rally was held in Philadelphia [see: http://www.sovietjewry.org/gallery_photo.php?photo=42]. Natan Sharansky’s Philadelphia speech at the rally in 1986, just half a year or so after his release from the Soviets, was a remarkable highlight of these rallies.
Let us show that we can all love each other in Jewish unity during this High Holiday season and always. The Talmud Bavli introduces the Aramaic phrase, Kol Yisrael arevim zeh bazeh, meaning all of the People of Israel are responsible for each other in Shevuot 39a. Let each of us meditate on that idea, grow from it, and take action.

Joshua Goldstein is the chairman of Herut North America and a board member of the American Zionist Movement on behalf of Herut. Joshua was a delegate at the 36th and 37th World Zionist Congress. Moshe Phillips is national director of Herut North America’s US section. Herut is an international movement for Zionist pride and education and more about Herut can be found here: http://herutna.org/.

Deconstructing the Oslo Accords 25 years later: Was it a gift or a curse?
Trump praises GOP congressman who body slammed Jewish reporter