It’s time to call violent anti-Semitism what it is: domestic terrorism 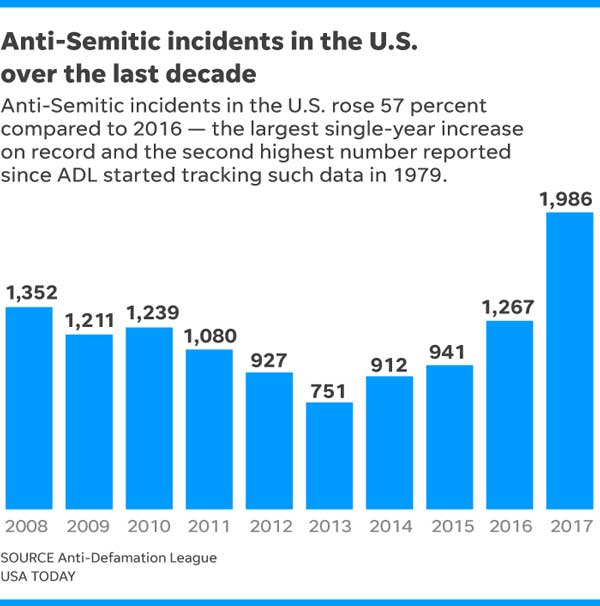 By RON KLEIN
LAUDERDALE, Fla. (JTA) – The end of 2019 should have been a time of joy for Jewish Americans celebrating Chanukah and ushering in a new decade. Instead, Chanukah was marred by numerous acts of violence and other forms of anti-Semitism, leaving Jews questioning how it’s possible that, in 2020, we’re less safe today than ever before in America.

Justice
As American Jews grapple with how to combat rising hatred and bigotry, one thing is clear: The perpetrators of anti-Semitic violence must be brought to justice, and our government should ensure not only that they are apprehended and punished, but that we prevent and deter future attacks. Even in this era of partisan polarization, one would hope and expect that our elected officials could agree on the necessity of fighting the scourge of anti-Semitism and other forms of bigotry with meaningful legal action.

This must be a multi-pronged effort, both short and long-term, that includes ensuring that the perpetrators of domestic terrorism are punished as terrorists. Recently, New York Governor Andrew Cuomo accurately described the anti-Semitic knife attack in Monsey, New York as an act of “domestic terrorism.” The same language was used by the FBI in response to the December attack on a kosher market. The FBI made close to 100 arrests and opened 850 investigations tied to domestic terrorism in the first nine months of 2019, culminating in a spate of anti-Semitic violence in and around New York the last week of 2019.

What Must Be Done?
But the label of “domestic terrorism” currently represents no more than words on a page when it comes to the law. More must be done.

Current law defines domestic terrorism as a dangerous act occurring within U.S. territory that violates criminal laws in ways that are “intended to intimidate or coerce a civilian population.” The violent anti-Semitic attacks we have recently witnessed in America are intended to do just that — intimidate and create fear among innocent civilians. Whether physically attacking Jews walking down the street, murdering Jews worshipping in synagogues or their homes or committing violence against Jewish institutions and businesses, these anti-Semitic hate crimes are acts of domestic terrorism.

Terror In America
If the perpetrators of such acts were foreign-based or part of an international terrorist organization, they would be prosecuted as terrorists. But because they are Americans operating domestically, we treat them differently under existing law. This is unacceptable and must change. Domestic terrorism must be fought with the same tools as international terrorism, carefully balancing the need to improve security with safeguards to protect civil liberties and defend against infringement of constitutional rights.

Americans are three times more likely to be targeted in a terrorist attack committed by an American than by a foreign national operating domestically. This is why federal and state lawmakers should follow the lead of New York, where Gov. Cuomo recently pledged to introduce a bill that includes classifying mass violence motivated by hate as acts of domestic terrorism, and increasing punishment for the perpetrators of such acts.

Legislation Needed
In his recent State of the State address, Gov. Cuomo outlined his proposal for such legislation, encouraged other states to take similar action and announced plans to establish a task force to examine the issue. These are critically important measures that send a powerful message that anti-Semitic violence with intent to cause mass causalities and terrorize a community is not only horrific, but also an act of terrorism.

Congress must also pass the Domestic Terrorism Prevention Act, which would create offices dedicated to monitoring and combatting domestic terrorism across the U.S. government. The bill would improve our ability to combat domestic terrorism by requiring the sharing of information with law enforcement and the public, and ensuring that law enforcement agencies are properly trained in this area. Passage of such legislation, combined with legislation that would impose stiff penalties for domestic terrorism, would send a powerful message at a critical time.

Our political climate has fueled a fire of hatred, white nationalism, and anti-Semitism that reminds us of the darkest moments in our history as Jews. Unfortunately, the rise of anti-Semitism has demonstrated no signs of abating. In the five-week period from Dec. 1, 2019 through Jan. 6, 2020, the Anti-Defamation League has confirmed 43 anti-Semitic incidents in New York alone. This represents a more than 40 percent increase from the previous year, and includes one of the most violent anti-Semitic attacks in New York state in recent memory.

We are now seeing how the historical symptoms of fear and hate, even in a country as great as ours, can lead to violence and threaten our sacred values of inclusion and equality. This is the moment for all Americans to stand up and speak out with one voice in support of dignity and security for the Jewish community and all groups targeted by violence. This is our history and our legacy, and it’s why the Jewish Democratic Council of America, which I chair, recently came together to Jews and non-Jews from across the political spectrum to demand meaningful action against anti-Semitism at the “No Fear. No Hate” rally against anti-Semitism in New York.

We must continue to stand together to demand that our elected officials do more to ensure our security, and take action to protect it. One important measure for doing so is by recognizing and punishing violent anti-Semitism for what it is — domestic terrorism.