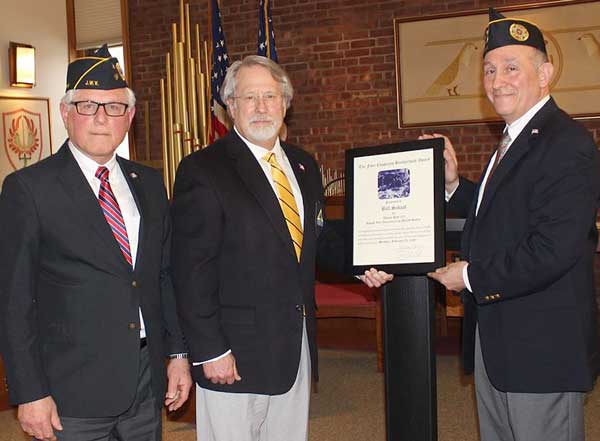 Members of the Jewish War Veterans (J.W.V.) joined with the First Reformed Church of Schenectady and more than 120 attendees in the church’s Clark Poling Chapel to honor Bill Schaaf of the Patriot Guard Riders as the 55th recipient of the Four Chaplains Brotherhood Award on Sunday, Feb. 23.

“Albany Post 105 of the Jewish War Veterans has led the effort to recognize a member of the community since 1966 with the non-denominational award honoring people whose deeds symbolize the legacy of the Four Chaplains,”said Fred Altman, post commander for Albany Post 105. 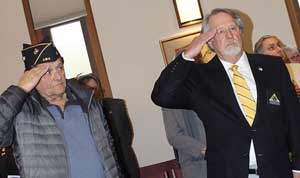 The Four Chaplains died in the North Atlantic on Feb. 3, 1943 during the sinking of the troopship Dorchester. After helping distribute life jackets to soldiers who had left theirs below deck and guiding them to life boats, the chaplains, a Protestant minister, Dutch Reformed minister, Catholic priest and rabbi, without hesitation, removed their own life jackets and gave them to others as the ship sank. Of the 904 aboard, 605 were lost.

Schaaf, of Troy, has more than a dozen years of supporting the veteran community in his role as a Patriot guard rider, ride captain, senior ride captain and assistant state captain. Since 2016, he has served as State captain and president of the Patriot Guard Riders Board of Directors.

“The Jewish War Veterans Albany Post 105 are to be commended for keeping their ecumenical spirit alive and well in holding this ceremony in the very church building whose Christian services were presided over by one of the Four Chaplains, Lt. Clark Poling,” Schaaf said. “How fitting it is that we meet here in his remembrance.”

Born and raised in Buffalo, Schaaf served in the U.S. Army from 1968 to 1971, leaving service with the rank of sergeant.  He is employed as a licensed insurance broker.

In 2009, three years after he joined the Patriot Guard Riders, he was lead coordinator for Patriot Guard honors for the three-day escort of remains of an unknown Civil War Union soldier brought home from the Antietam Battlefield for interment at the Saratoga National Cemetery.

In a similar role, he became state coordinator for the Patriot Guard Veterans Recovery Program that year, creating and managing a program with New York funeral directors to identify unclaimed cremated remains of veterans to ensure they receive military honors and interment. Under his direction, more than 200 unclaimed veterans have received their final honors and interment at Bath National or Saratoga National Cemeteries. 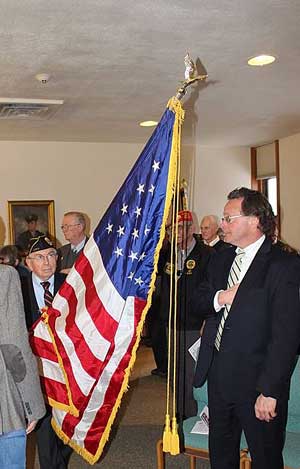 Past JWV Post 105 Commander Dr. Howard Pressman carries the colors for the opening ceremony of the Four Chaplains Remembrance Ceremony.

Since 1966, the Jewish War Veterans of the Capital District have recognized civic leaders, community organizers and issue advocates, educators, healthcare providers and clergy for their humanitarian efforts  with this award.

The Netherlands is OK with citizens being exposed to the coronavirus. That’s terrifying to me and nearby Jewish communities.
It could be easy to lose sense of time during the pandemic. Jewish tradition has an antidote