Jamal Khashoggi’s reputation and what it might mean politically 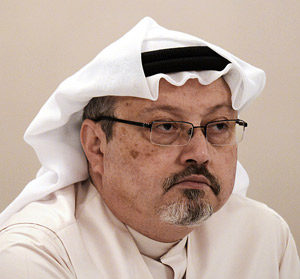 By RON KAMPEAS
WASHINGTON (JTA) – Two weeks after he disappeared, Jamal Khashoggi, the Saudi Washington Post columnist, is getting his reputation run through a wringer, and some pro-Israel voices are joining the pile-on.

Even as gruesome allegations emerge that he was tortured, murdered and dismembered after entering the Saudi consulate in Istanbul, some Israel supporters have joined other figures on the right in describing Khashoggi as a terrorist sympathizer and fierce opponent of Israel. Their goal appears to be to counter a portrait of Khashoggi as a Saudi reformer and free speech activist, and perhaps derail pressure building on the White House to punish Saudi Arabia for his disappearance and presumed murder.

None of the purveyors of the attacks on Khashoggi agreed to an on-the-record interview, although other observers suggested that the public fight over Khashoggi’s reputation has to do with a number of issues central to the latest crisis in U.S.-Saudi relations: cultivating Saudi cooperation in the diplomatic fight against Iran, keeping the Saudis on board the Israeli-Palestinian peace process, and maintaining the kingdom as a bulwark against violent forms of radical Islam.

Who’s Saying What
The hits on Khashoggi, deriding him as a radical Islamist and an anti-Semite, have emerged alongside gruesome reports by official Turkish sources about his disappearance: According to the Turkish reports, the U.S.-based columnist entered the Saudi consulate in Istanbul for some paperwork ahead of his planned wedding to a Turkish national, and a team of 15 Saudi agents was waiting to torture and kill him.

As reported in The Washington Post, the anti-Khashoggi narrative is emerging among hard-line conservatives and is being circulated in Republican congressional offices.

Donald Trump Jr. retweeted one of the earliest attacks on Khashoggi, from a correspondent for the PJ Media conservative website. The correspondent, Patrick Poole, had posted photos of interviews Khashoggi had conducted in the late 1980s with Osama bin Laden, who went on to found al-Qaeda and to plot the Sept. 11, 2001, terrorist attacks.

“I didn’t realize until yesterday that Jamal Khashoggi was the author of this notorious 1988 Arab News article of him tooling around Afghanistan with Osama bin Laden and al-Qaeda co-founder Abdullah Azzam,” Poole tweeted on Oct. 12, 10 days after Khashoggi’s disappearance. “He’s just a democrat reformer journalist holding a RPG with jihadists.” A photo showed Khashoggi posing with a rocket-propelled grenade.

The interview was at a time when the Reagan administration was backing insurgents in Afghanistan. Khashoggi was indeed sympathetic to bin Laden (the Khashoggi and bin Laden families were close). When bin Laden launched terrorism operations against the West, however, Khashoggi disavowed him.

Other joined the fray. FrontPage mag, helmed by right-wing provocateur David Horowitz, ran an article the same day declaring, “Jamal Khashoggi blamed 9/11 on U.S. support for Israel.” The article cites a piece Khashoggi wrote in 2001 after the attacks, published in Arab News and the Guardian, in which Khashoggi sympathetically describes Saudi reactions to the attacks but does not outright endorse them.

Khashoggi’s piece falls short of blaming U.S. support for Israel for the attacks, although he says that Saudis saw the Sept. 11 attacks as of a piece with Israel’s treatment of the Palestinians — a posture that would offend Israelis and many Americans. When Khashoggi does express his opinion, it is to condemn bin Laden for targeting civilians.

“The Wiesenthal Centre expresses its horror and revulsion at the presumed gruesome murder of journalist Jamal Khashoggi,” the release said. “In a search, however, of his official Twitter account, Simon Wiesenthal Centre Director for International Relations, Dr. Shimon Samuels, discovered the following tweets of 16 October 2015.”

In the tweets, Khashoggi denies any Jewish connection to the land of Israel, and says the Western Wall was a Muslim construction — a false narrative that infuriates Israelis, and is commonplace in the region, particularly among Palestinians.

The Wiesenthal Centre in Europe did not reply to requests for comment.

Rabbi Abraham Cooper, the Wiesenthal Center’s Los Angeles-based associate dean, told JTA that Samuels’ post was premature. “It could be that Shimon in Europe is not as sensitive” to the repercussions of Khashoggi’s reported murder, he said. “There’s a lot of appropriate anger” at the Saudis. At a later date, the center might publish a fuller and nuanced account of Khashoggi’s life and influence, Cooper said.

Josh Block, the CEO of The Israel Project has posted multiple tweets implicating Khashoggi in an array of terrorist activities. On Oct. 18, Block quoted a New Yorker article describing Khashoggi as a journalist, and commented, “Uh, U mean frontman for Islamists & paid spook for Qatar, Turkey & Turki al Faisal, whose ‘journalism’ was a cover for his real work, just as he wrapped his Islamist ideas in flowery language of ‘human rights’ as he praised Hamas & called for Israel to be destroyed by violence.” Block declined to comment and his sources are not clear.

Motivation For The Criticism Of Khashoggi:

The Muslim Brotherhood connection
Some accounts in mainstream media have suggested that Khashoggi was a more complex figure than the reformer that his friends and allies have depicted.

“Several Muslim Brothers said this week that they always felt he was with them,” The New York Times reported, referring to the multinational Islamist group, the Muslim Brotherhood. “Many of his secular friends would not have believed it.”

If Khashoggi was a member of the pre-eminent Islamist organization in the Middle East, his critics charge, whitewashing that affiliation is a disservice to history, and helps elevate a group that should be marginalized.

“#Khashoggi did not deserve his fate,” tweeted David Reaboi, an analyst with a conservative think tank, Security Studies Group. “That said, the misrepresentation of his Islamist views as championing ‘freedom’ and ‘democracy’ is a repulsive whitewash.”

“[U]nless you are rooting for an Islamist Middle East, it seems doubtful that Khashoggi’s vision for the region was a big improvement over the agenda of the autocratic Saudis,” wrote Petra Marquardt-Bigman, a journalist, in an op-ed in Haaretz outlining Khashoggi’s sympathetic views on Hamas and the Muslim Brotherhood.

Tamara Cofman Wittes, a senior fellow at the Center for Middle East Policy at the Brooking Institution, knew Khashoggi for a decade. She warned against a simplistic take both on Khashoggi’s views and on the Muslim Brotherhood. The Muslim Brotherhood, she pointed out, is a presence in parliaments of U.S. allies in the region, like Jordan, and in the governments of allies like Morocco.

“The Muslim Brotherhood is in the mainstream,” Wittes said, and noted that Saudi hostility to the group was recent. For decades, Saudis welcomed and promoted the group.

“There was nothing out of the mainstream, nothing oppositional about being sympathetic to the Muslim Brotherhood in Saudi Arabia until a few years ago,” she said.

Right-wing pro-Israel figures have embraced Trump because he has embraced their outlook, moving the U.S. embassy to Jerusalem and pulling out of the 2015 Iran nuclear deal, and now they may be returning the favor, said Michael Koplow, the policy director for the Israel Policy Forum, a group that backs the two-state solution.

Kushner has not revealed details of the plan, but right-wingers are hopeful that it rolls back many of the pro-Palestinian orthodoxies of past plans, including statehood as an outcome and a presence in Jerusalem’s Old City.

Netanyahu is counting on Saudi Arabia
Israeli Prime Minister Benjamin Netanyahu has touted emerging ties with Saudi Arabia and other countries as validating his strategy of downplaying peace with the Palestinians, believing he can make Israel at home in the region without the Palestinians. Bin Salman was a key figure in this strategy.

“Much of the Israeli argument for the lack of Israel’s isolation hinges on the fact that Saudis are behind the scenes friendly in ways we couldn’t imagine before,” Koplow said.

Wittes was skeptical that Israeli officials have encouraged the efforts to puncture Khashoggi’s reputation. Instead, she said, the attacks seemed to be a result of the polarization on the American political scene, in which allies on the left or the right attack the other side in a way that does not necessarily serve their particular interests.

“What we’ve witnessed in American politics is this intense polarization, and when a stance is taken” by your side, “you tend to echo that without reflection on your interests,” she said.

Don’t forget about Iran
Israel and the Trump administration see Saudi Arabia as key to containing the influence of Iran in the region. Some of the pundits highlighting Khashoggi’s Muslim Brotherhood past suspect that  supporters of the Iran deal are behind an effort to smear the Saudis. Isolating the Saudis, they fear, would undercut support for the Trump administration’s hard line on Iran, and his rejection of the sanctions-relief-for-nuclear-rollback deal negotiated by Trump’s hated predecessor, President Barack Obama.

Khashoggi “made a tactical alliance with former Obama officials who seek to depict Trump’s pro-Saudi and anti-Iranian policy as a disaster,” Mike Doran of the conservative Hudson Institute and Tony Badran of the hawkish Foundation for Defense of Democracies, write this week in the New York Post. “Trump, in this view, is the enabler of a young, impetuous crown prince. Conflicts such as Yemen result from Saudi recklessness rather than Iranian expansionism.” Bin Salman has directed a bombing campaign against Iranian-backed forces in Yemen.

Daniel Shapiro, Obama’s ambassador to Israel, rejects the argument that confronting Iran is more important than dealing with Khashoggi’s murder.

“It has a whiff of trying to say this murder wasn’t as bad as it is because of the investment made in Saudia Arabia under [bin Salman] as a strategic anchor under the anti-Iran coalition,” Shapiro, a visiting fellow at the Institute for National Security Studies in Israel, said in an interview.

Groups that want Iran isolated, and quickly, are frustrated by the Khashoggi distraction, Shapiro said.

“If indeed the United States cannot conduct business as usual while this is unresolved, it puts at risk that whole kind of strategic concept Israel has counted on and strong opponents of Iran have counted on,” he said.

Israeli and Jordanian experts downplay significance of peace-treaty changes
We need to talk!