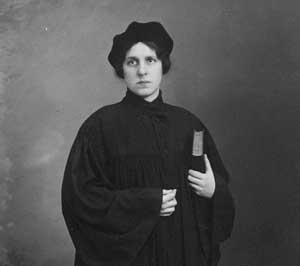 The only existing photo of Rabbi Regina Jonas as seen in the documentary “Regina,” which will be shown at Temple Sinai in Saratoga on Sunday, Jan. 5.

SARATOGA SPRINGS–Saratoga Jewish Community Arts will present the film “Regina,” the story of the first female Jewish rabbi. The screening, at Temple Sinai, 509 Broadway, Saratoga Springs, will be on Sunday, Jan. 5, at 7 p.m.  The film will be followed by a panel discussion and dessert reception.

According to event organizers, most American Jews believe that ordination of women rabbis is a phenomenon arising from the feminist movement of the 1970s. However, the first woman rabbi in the world, Regina Jonas, was ordained in 1935 and served German Jewry in Berlin and in the Theresienstadt concentration camp. She would die in Auschwitz in 1944, at the age of 42.

““Regina” is not a Holocaust tale, but a gracefully edited documentary of a woman who emerges as determined, fearless with the true calling of a rabbi,” says Saratoga Jewish Community Arts Coordinator, Phyllis Wang.

The documentary, written and directed by Hungarian Jewish filmmaker Diana Groo, relates Rabbi Jonas’story through footage from the time period. Groo tried to stay true to the hundreds of documents Jonas managed to have secretly stored for posterity that were not uncovered until after the fall of the Berlin Wall.

The documentary details how Jonas father, a poor Orthodox Jewish peddler who died when she was only 11, insisted on giving both his son and daughter a religious education.

Later she attended the Academy for the Science of Judaism, graduating as an “Academic Teacher of Religion.” Jonas wrote a thesis that would have been a requirement for ordination and the thesis was: Can a Woman Be a Rabbi According to Halachic Sources? Her conclusion, based on biblical, Talmudic, and rabbinical sources, was: Yes.

However, the spiritual leader of German Jewry who was one of her teachers, Leo Baeck, refused. She was eventually ordained by liberal Rabbi Max Dienemann, head of the Liberal Rabbis’Association. She worked first as a chaplain in various Jewish social institutions until after many rabbis, were  either sent to concentration camps or left the country and shehad the opportunity to be a rabbi and preach. She was soon ordered by the Nazis into forced labor in a factory, but despite this, continued her rabbinical work.

A $5 admission/donation is requested. Reservations and information may be obtained by calling 518-584-8730, opt, 2; www.saratogajewishculturalfestival.org.