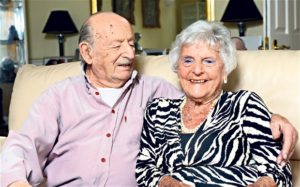 Helen and Maurice Kaye, aged 104 and 105, recently celebrated their anniversary  surrounded by their family at home in Bournemouth, the Jewish Chronicle of London  recently reported, noting the longevity milestone.

The couple met when Maurice Kaye was a traveling salesman for his father’s clothing business. They have been together for 87 years.

“So much has changed, but we still have each other, thank God,” he was quoted as saying. “We had a great day with fabulous entertainment from our gorgeous great-grandchildren. Now on to the next milestone.”

Helen Kaye said: “I surprised myself how much I enjoyed it,” referring to the anniversary party the couple had at their home approximately 100 miles west of London.

Their daughter, Tina, said her parents were an “inspiration to everyone who knows them and we count ourselves truly blessed.” She described her mother as being “very stylish, having her hair done twice a week and her nails done every Friday,” and her father as still having “the same wicked sense of humor and zest for life.”

The couple said they could have been celebrating their 87th wedding anniversary were it not for the fact that Helen Kaye had not been allowed to marry sooner, as she had an older sister and tradition dictated that she should have the chance to wed first.

Once married, Maurice Kaye went on to manage his father’s factory and two shops in London before joining the army in 1939, according to the Jewish News.

In 1944, the couple’s factory, shops and home were destroyed in the war, leading them to move to Bournemouth, where they had four children.

“I didn’t think it would last a week, but it’s amazing it’s lasted 80 years,” Maurice Kaye was quoted as telling the Jewish News jokingly several years ago about his marriage.

In that prior interview, he offered the secret to their happy marriage: always agreeing with his wife.