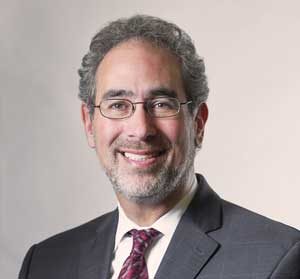 ALBANY– David E. Siegfeld, a partner at Lippes Mathias Wexler Friedman LLP, was installed as chairman of the Jewish Federation of Northeastern New York’s board of directors at its annual meeting on June 13. Siegfeld has served on the board for eight years.

The mission of Jewish Federation of Northeastern New York is to build and maintain a strong and united Jewish community to ensure the creative survival and continuity of the Jewish people. It is the community’s central agency for meeting Jewish needs and articulating Jewish concerns in the Capital Region, and as part of the Jewish Federations of North America, also in Israel, nationally, and around the world.

Incoming chairman, Siegfeld, acknowledged his predecessor Bob Finkle and commented on their shared vision of “strengthening our outreach to our Jewish community…sharing a message of inclusiveness…and… implementing a modern-day approach to the solicitation of funds for our grants, allocations, and programs.

Siegfeld remarked, “Without a vibrant Federation, I believe this community would be at a loss to efficiently and meaningfully offer the support we currently provide locally… Equally as important, we need our Federation to continue our unwavering support of the citizens of the State of Israel and Jews around the world.”

During his term, Siegfeld said that he is determined to achieve a growing campaign, allowing more resources to be allocated throughout Israel—especially to the Federation’s partner region Eshkol; without compromising local allocations. “We must ensure our annual campaign and endowments continue to grow, continue to provide resources and initiatives to our agencies (such as Life & Legacy™) to assist in growing their endowments…”

The annual meeting, which was attended by 75 community members, included awards, updates on the past year, other board member nominations and installations, and a community dessert reception. 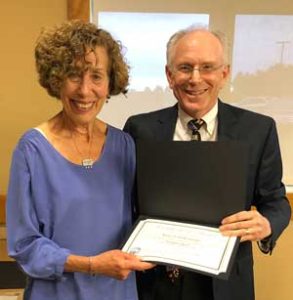 The General Electric Company brought the Zonderman family Ann and Paul, and their children, Lauren and Jeff from Massachusetts to Niskayuna in 1977. Ann Zonderman was selected for the President’s Award for her dedication to community. She has been a leader in Women’s Philanthropy at the Federation. She served as campaign chairwoman, and continues on its board.  She has served on the Federation’s board of directors and is on the campaign cabinet. Zonderman is also involved with Congregation Agudat Achim in Schenectady having served on its board, strategic planning committee, and as a volunteer with its catering service. She has also served on the Daughters of Sarah Auxiliary and the board at Jewish Family Services. In the secular community, she has served on the boards of Bethesda House and Working Group on Girls of Schenectady. Professionally, Zonderman has had a career in speech and language therapy in the Amsterdam School District.

Bloomberg’s lifetime of community involvement was noted with the Sidney Albert Community Service Award.  He reports that he is inspired by his children, Jill and Jon, and his grandchildren to make the world a better place today and for generations to come. Bloomberg has served as the Federation’s annual campaign chairman multiple times. He is a member of the Federation’s Endowment Board of Governors and he serves on the board at Daughters of Sarah. He was the first president of Albany Meals on Wheels, and he has volunteered with Senior Services of Albany. In 2010, he received the Dr. Morton Berger Memorial Award from Maimonides Hebrew Day School.  In 2015, Bloomberg was recognized by the Albany JCC as a Pillar Of The Community. Bloomberg was raised in Swampscott, Mass. and is a graduate of Yale University.  He is the owner of Capitol Staple Company in Albany and a member of Congregation Beth Emeth and the Albany JCC.

After a dvar Torah by Rabbi Scott Shpeen, Bob Finkle, chairman 2017-2019, reported on the Federation’s year including: establishment of a new marketing committee, the growing partnership with Eshkol, the relationship with the Harold Grinspoon Foundation and the  PJ Library, growing support for seniors, the strengthening of interfaith relations and community 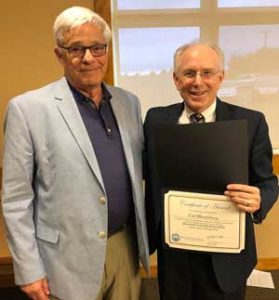 security preparedness, the Jewish Coalition for Literacy, and encouraging results of leadership training programs and other trainings implemented by the Federation’s engagement department.

Rona Pozner, past chairwoman and member of the nominating committee, presented and installed the 2019-2020 officers, new and renewing board members.

Installations of Federation Board of Directors 2019-2020 included:

Corporate sponsors of the annual meeting: Harris A. Sanders  Architects, Modern Carpet/Shaw Industries, and New Country Motor Group, were recognized for their support at the meeting.