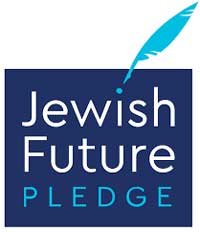 By ELIANA RUDEE
(JNS) – A newly launched nonprofit is calling on worldwide Jewish donors, young and old, to allocate at least half of their charitable dollars transferred at death to Jewish and Israel-related causes.

Philanthropist and entrepreneur Michael Leven and longtime Jewish executive Amy Holtz launched the Jewish Future Pledge (JFP) initiative in May, during Jewish Heritage Month, with the aim of securing a vibrant Jewish future and inspiring the next generation of Jews to help support it.

“Everyone Can Donate”
According to the organization, Jewish donors are estimated to transfer $1.26 trillion to charitable causes in the next 25 years; JFP hopes to direct half of that, or $630 billion, to Jewish causes. The Pledge, which was inspired in part by Bill Gates’ and Warren Buffett’s “Giving Pledge,” has already been signed by notable Jewish philanthropists like Charles Bronfman, Bernie Marcus, Julie Platt and Tom Stern.

But this is no billionaires club, Holtz told JNS. Every Jew can take part, even with small dollars. “We built the State of Israel on nickels and dimes,” she remarked.

Explaining how the allocation works, Holtz posed, “I am leaving X amount of dollars for my kids, and the only parameter is that 50 percent of those dollars need to be for Jewish giving. I can choose to leave the money to specific charities or the kids can decide where to give.”

Launched In Atlanta
“You don’t need to be a millionaire or have a family fund to participate,” said Leven in a letter to his fraternity brothers at Alpha Epsilon Pi (AEPi), a partnering organization. “This is not a fund-raiser. It is a monumental chance to sustain the financial future of the Jewish people, and to ensure that our values and wisdom endure for generations.”

The nonprofit had a soft launch in Atlanta in partnership with the Jewish Federation of Greater Atlanta, where it garnered its first batch of hundreds of signatures, also securing partnerships with a range of other Jewish and financial organizations across the United States.

JFP leadership decided to proceed with their national launch despite the coronavirus pandemic. “We must navigate this crisis without losing sight of the future. The challenges of this moment illustrate the importance of planning for the unknown,” said Holtz. “COVID highlights need that we need to act now and plan for unknown.”

Jewish Future Pledge Chairman Mark Silberman, who previously served as chairman of the Jewish Federation of Greater Atlanta, added, “We are in an existential moment. Perhaps more than ever before, people are thinking about what’s important in life and what legacy they will leave behind.”

Sparking Conversations
With three simple steps: “Sign it, seal it and share it,” the pledge is not only about giving, but about sharing their pledge with friends and family, which will spark conversations about the importance of donating, ensuring Jewish life for generations to come and imparting one’s values.

“It is not just sharing money, but wisdom, values and life lessons,” said Holtz. “The pledge is saying to the next generation: ‘We believe in your generation.’ With the risk that kids are turning away from Judaism, and may not be as connected as the previous generations, we are combining tremendous opportunity with risk.”

“I wanted to start a conversation with my family about the importance of securing the Jewish future,” added Leven. “I see an enormous opportunity to help spark thousands, even millions, of similar conversations around Jewish tables before my generation passes about why the Jewish future matters.”

Each individual who signs the pledge, affirmed Holtz, should speak to a lawyer about how to legalize their pledge in their estate.

JFP has also started a pledge for the younger crowd, partnering with major Jewish youth organizations.

“So far, the response has been phenomenal across the board, with people and organizations showing their support for this simple but powerful concept,” maintained Holtz.

AEPi (of which Leven is an Alumnus Brother) and NCSY are among the partners of the youth pledge, with more to be announced.

“Taking the Jewish Future Pledge not only honors our ancestors who sacrificed and suffered through exile and oppression, but it is a gift to my children to ensure the strength of klal Yisrael, the Jewish people, and the State of Israel,” Jeff Jacobson, the fraternity’s international president told JNS.

Israel ‘hits emergency brake’ on easing of COVID-19 restrictions
The Palestinian Issue: a Core Cause of Middle East Turbulence?