Supporters of  the  Jewish National Fund-USA (JNF) in the Capital Region gathered in January for two forums featuring JNF affiliates MAKOM and the Lauder Employment Center.

“MAKOM is an important part of JNF’s plan to develop Israel’s Negev Desert and Galilee region,” said Mitzman. “We provide important community-building tools for Israelis who seek to develop initiatives that bring their surrounding friends and neighbors closer together. We are strengthening the fabric of Israeli society, and we are doing it with JNF.”

JNF held a parlor meeting on Jan. 8, at the home of Eric and Gilah Moses in Schenectady. Tamar Gil, deputy director of the Lauder Employment Center spoke of how the Center is a central component in JNF’s Blueprint Negev campaign, a strategy for bringing 500,000 new residents to the Negev. “In collaboration with JNF, we are playing the role of a matchmaker where we identify ‘shiduchs’ (matches) between companies seeking great employees and college students and recent graduates who have relevant experience. We are connecting industry with the academic and government sectors to identify disconnects between the jobs that companies need to fill, the skillsets that job seekers require and the types of courses that universities should be teaching,” according to Gil. 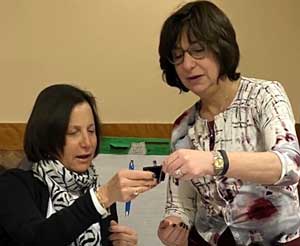 Since 2015, JNF, Ben-Gurion University, and Eretz Ir, with the support of philanthropist and JNF Chairperson of the Board-Emeritus, Ronald S. Lauder, have operated the Be’er Sheva based employment center to help build the local economy and provide  opportunities for graduates in the Negev. Graduates were leaving the area to seek challenging jobs. The center is changing this reality by creating career opportunities in cooperation with industry and business leaders.

While in the area, Gil also met with New York State’s Department of Labor Commissioner, Roberta Reardon, and Deputy Commissioner for Workforce Development, Karen Coleman, in Albany. Gil and the Labor department officials discussed the challenges that Upstate New York and Israel’s north and south share as they strive to attract job seekers to opportunities outside of the major cities such as Manhattan and Tel Aviv. Gil was interested in the various programs that the Department of Labor has implemented to support job creation and reviewed how the Lauder Employment Center supports job growth in nascent industries such as cyber security and high-tech manufacturing.

Local community members interested in attending JNF’s Capital Region breakfast on Friday, May 15, or those who would like information about JNF may contact Campaign Executive, Rina Wagman at rwagman@jnf.org or call 617-423-0999, ext. 812.

DC Report: Israel — has it beome a diminished democracy?
Hurwitz to share her new relationship with Judaism at book talk at Gates on March 24