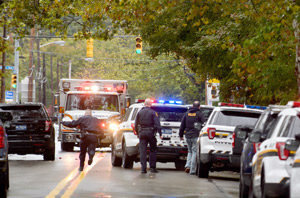 Police responding to the site of a mass shooting at the Tree of Life Synagogue in the Squirrel Hill neighborhood of Pittsburgh, Oct. 27, 2018. Photo courtesy of Jeff Swensen/Getty Images.

“I am The Jewish Nurse. Yes, that Jewish Nurse. The same one that people are talking about in the Pittsburgh shooting that left 11 dead. The trauma nurse in the ER that cared for Robert Bowers who yelled, ‘Death to all Jews,’ as he was wheeled into the hospital. The Jewish nurse who ran into a room to save his life,” Mahler began his post. “To be honest, I’m nervous about sharing this, I just know I feel alone right now and the irony of the world talking about me doesn’t seem fair without the chance to speak for myself.”

Mahler was one of three Jewish doctors and nurses to tend to Bowers when he was brought to Allegheny General Hospital with gunshot wounds sustained during a shootout with police after he allegedly killed 11 worshipers at the Tree of Life Congregation on Oct. 27.

The son of a rabbi, Mahler noted that he “experienced anti-Semitism a lot” as a kid, including swastikas drawn on his locker and pictures drawn showing him and his family being marched to a gas chamber. And, he said, he did not tell anyone about the anti-Semitism he was suffering.

Mahler noted that his actions are being talked about on local, national and international news and marveled in his post that “The fact that I did my job, a job which requires compassion and empathy over everything, is newsworthy because I’m Jewish. Even more so because my dad’s a Rabbi.”

Hospital president Dr. Jeffrey Cohen told the Pittsburgh Tribune Review after the attack that Mahler, whom Cohen did not name, broke down in tears shortly after treating Bowers. “I told him how proud I was. He went home and hugged his parents,” Cohen told the newspaper.

Mahler said in his Facebook post that he did not see evil in Bowers’ eyes but rather “a clear lack of depth, intelligence and palpable amounts of confusion.” He said that Bowers “thanked him for saving him, for showing him kindness and for treating him the same way I treat every other patient.”

Mahler said that he did not tell Bowers that he was Jewish. “I chose not to say anything the entire time. I wanted him to feel compassion. I chose to show him empathy. I felt that the best way to honor his victims was for a Jew to prove him wrong,” he wrote.

He said he acted out of love.

“Love as an action is more powerful than words, and love in the face of evil gives others hope. It demonstrates humanity. It reaffirms why we’re all here. The meaning of life is to give meaning to life, and love is the ultimate force that connects all living beings,” Mahler wrote. “I could care less what Robert Bowers thinks, but you, the person reading this, love is the only message I wish to instill in you.”

Since it was posted on Saturday evening, the message has been shared nearly 34,000 times and liked more than 53,000 times. Most of the comments called him “strong,” and “amazing,” and thanked him for sharing his thoughts and message of love.