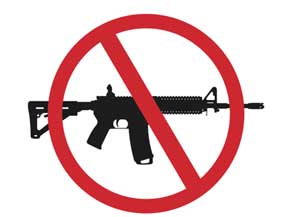 By RON KAMPEAS
WASHINGTON (JTA) — The umbrella body that sets consensus on issues for American Jewish public policy adopted stances on guns and on unions that are at odds with the Trump administration.

A resolution on appointments to the judiciary does not directly take on the administration but calls for the approval of judges who are not “partisan” and have the approval of the American Bar Association. Trump has assailed judges who do not uphold his policies and nominated a number of candidates for judgeships whom the ABA has rated as not qualified.

Two JCPA resolutions comported with Trump administration policy, on rehabilitation for prisoners and adopting the International Holocaust Remembrance Alliance definition of anti-Semitism, which includes some types of attacks on Israel.

The sixth resolution called on Jewish organizations to provide food at events that meets “religious requirements of every segment of their community,” and noted that JCPA has always met the kashrut requirements of one of its constituent groups, the Orthodox Union.

Trump pardons Michael Milken, junk bond king of the ’80s
Israelis called to gather at Western Wall to pray for coronavirus victims around the world