Jewish Republicans and Democrats agree on this: Watch Florida 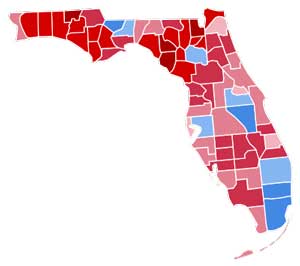 By RON KAMPEAS
WASHINGTON (JTA) – Two Jewish political communities, Republicans and Democrats, met separately and disagreed on just about everything but this: Jews in Florida could decide this election.

Other than that, the recent virtual meetings held on the eve of back-to-back political conventions, were occupied by two big ideas: Republican Jews focused on Israel, while Democratic Jews focused on domestic threats to American Jews.

Making A Difference
Each community seized on a coincidence: At the Republican Jewish Coalition event, participants thrilled to President Donald Trump’s announcement of plans to normalize ties between Israel and the United Arab Emirates; speakers at the Jewish Democratic Council of America event marked the three-year anniversary of the deadly neo-Nazi march in Charlottesville and what they said was Trump’s failure to condemn it.

A big chunk of each meeting, however, was about how Jews, as voters, could make the difference this year. The speakers, including RJC director Matt Brooks and his JDCA counterpart, Halie Soifer, named a number of swing states with substantial Jewish populations where Jewish voters could make the difference, including Michigan, Ohio and Pennsylvania, but Florida loomed largest.

Soifer, at the JDCA event, cited the same races. The 2018 race was “painfully close,” she said. “If Jewish voter turnout in support of Democrats had been slightly higher in 2016, Florida would have gone blue.”

Soifer said Florida would clinch a win for Joe Biden, the Democratic nominee. “If Florida goes blue, Joe Biden will be the next president of the United States,” she said. There are an estimated 650,000 Jews in Florida, out of a total population of 21.5 million people.

The emphasis on voting was notable for the sea change it signified: Just 15 years ago, Jewish influence in electoral politics was reflected in political donations and to a lesser extent in voting patterns. The JDCA Zoom event thanked donors in a beneath-the-screen honor roll, telethon style, but the greater emphasis on both calls was on getting the Jewish vote out.

Money And Volunteers
Each organization said it would roll out a massive get-out-the-vote operation. Brooks said his group would dedicate $10 million to the operation, with millions of dollars going to TV ads and $1 million on ads on digital platforms.

The JDCA speakers did not mention spending numbers, and instead appealed for a massive volunteer turnout to reach 1 million Jewish voters in swing states. Brooks said the RJC had so far identified 250,000 Jewish voters for get-out-the-vote operations.

The RJC speakers acknowledged they were not likely to win a majority of the Jewish vote. Instead, as Ari Fleischer, an RJC board member and a onetime George W. Bush administration spokesman said, the mantra was “room to grow,” to increase Trump’s share from 24% in 2016 to the recent high of 30% Mitt Romney secured in 2012.

“Virtual Schlep”
The JDCA launched what it called a “Virtual Schlep for 2020,” a play on the 2008 “Great Schlep” when young Jewish Democrats were encouraged to visit their grandparents in Florida to urge them to vote for Barack Obama. That kind of trip, of course, is not advisable during the coronavirus pandemic.

“Research shows that phone banking can move an election up by 2.5 points,” said Blake Flayton, a campus fellow for JDCA and an Arizonan who is studying at George Washington University in Washington, DC.

Republicans have long complained about underrepresentation in the entertainment community, and it is as true in the Jewish political communities; the JDCA got broadway stars Ben Platt and Tovah Feldshuh.

The RJC call did not include entertainment breaks, but a useful contrast was a Zoom event a week ago organized by the Jewish Republican Alliance, a California group, which featured Diamond and Silk, the pro-Trump sisters whose shtick included mocking Michelle Obama’s mental health and riffing on whether Kamala Harris, Biden’s running mate, is high on weed.

The events otherwise reflected the vastly different conceptualizations of what being an American Jew means depending on whether the speaker is liberal or conservative.

Who Is Trump?
The RJC speakers were certain that Trump’s United Arab Emirates-Israel deal would move Jewish votes toward Trump. Although decades of polling show that Israel figures low in priorities for Jewish American voters. The RJC’s signature ad this election cycle calls Trump “the most pro-Israel president in history.”

“I really think this is Nobel prize-worthy stuff,” said Norm Coleman, the former Minnesota senator who is the RJC chairman.

The UAE deal did not merit a mention during the JDCA event; instead, there were multiple references to Trump’s alleged bigotry and his encouragement of white nationalists, and the need to counter it, often framed as “Tikkun Olam,” the Mishnaic precept of repairing the world that Jewish Democrats have appropriated as shorthand for social justice.

“It was only three years ago today, that Nazis marched in the streets of Charlottesville, and Donald Trump praised them as being ‘very fine people,’” Ron Klein, the former Florida congressman who is the JDCA chairman, said, although he was off by a day. Trump supporters note that in the same remarks in which Trump described the marchers — most of them neo-Nazis and white supremacists — as “very fine people,” he also condemned neo-Nazis and white supremacists.

“What we have seen since then, are the most violent anti-Semitic acts in US history, horrific attacks at synagogues in Pittsburgh and Poway and an unprecedented rise of acts of violence, vandalism, and threats against our Jewish community,” Klein said, referring to the massacre of 11 worshippers in Pittsburgh in 2018 and one in Poway, Calif. in 2019. “These acts are a direct result of Donald Trump’s betrayal of our Jewish and American values and his failure as a president.”

Israel
The first speaker to mention Israel at any length came toward the end of the JDCA session. Rep. Steny Hoyer, D-Md., the majority leader in the U.S. House of Representatives, who has long been close to the pro-Israel community, sounded a defensive note: “We will never abandon our ally Israel or stop fighting for its peace and security and always work to ensure that Israel can defend itself,” he said.

The specter of white nationalism was totally absent from the RJC call, until reporters brought it up. The Jewish Telegraphic Agency asked what the RJC planned to do about Trump’s  recent enthusiastic endorsement of Marjorie Taylor Greene, the conspiracy theorist who has peddled anti-Semitic smears and just won a primary in a heavily GOP district in Georgia. The RJC had backed her opponent in the primary.

How does the RJC transition from opposing a candidate who trafficked in discredited conspiracy theories to handling Trump’s fulsome praise for her?

Brooks said Trump’s endorsement was “meaningless” and “after the fact” and pivoted to the JDCA’s failure to campaign against Democratic incumbents who have also trafficked in anti-Semitic tropes, like Rep. Ilhan Omar of Minnesota. (Omar has apologized for some of her claims that lawmakers embrace Israel only because of pro-Israel money, and has stood by others. She and two other Democrats likely headed to Congress next year have also endorsed the boycott, divestment and sanctions movement.)

“The issue is what’s happening with the Democratic Party and the tremendous virulent sort of pro-BDS anti-Israel strain that’s running through with the progressives,” he said.