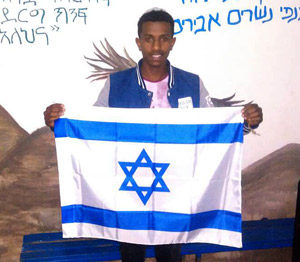 JERUSALEM (JTA) –A Jewish teen from Ethiopia who had been ordered to deposit thousands of dollars in order to participate in the final stages of the International Bible Quiz in Israel to guarantee that he would leave has been granted residency status.

While the residency status granted to Sintayehu Shafrao, 18, means that he can remain in Israel with relatives said to be his father and brothers, he also will not have an Israeli passport or be allowed to vote in Israeli elections like a full citizen.  Shafrao’s relatives reportedly made aliyah 17 years ago.

Interior Minister Aryeh Deri announced the granting of the residency status. Hadashot news reported, days after Shafrao arrived in Israel from Gondor, Ethiopia and after reports surfaced that the teen has been asked to put up thousands of dollars as a guarantee that he would leave the country when the contest was over on Israel’s Independence Day.

Shafrao will represent in the Bible contest Ethiopians known as Falash Mura, who claim Jewish descent. The Israeli government has pledged to bring the up to 9,000 Falash Mura remaining in Ethiopia who are waiting to make aliyah, but has not followed through with the funding for the operation.

After he arrived in Israel, the teen met with Israeli lawmakers and government ministers, including Justice Minister Ayelet Shaked. During the meetings he pleaded for the lawmakers to bring the remaining Ethiopians to Israel as soon as possible.

Filmmaker Milos Forman, director of ‘One Flew Over the Cuckoo’s Nest,’ dies at 86
Rabbi Rick Jacobs to speak at Beth Emeth as part of congregation’s 180th anniversary