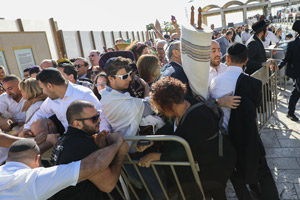 Members of the Reform movement and Hebrew Union College confront police and security guards while trying to enter a mixed men and women prayer area at the public square in front of the Western Wall in Jerusalem’s Old City, Nov. 16, 2017.

By ERIC BERGER
(JNS) – A pair of Israeli Cabinet members and a Knesset member have in recent weeks inflamed tensions between the Jewish state and leaders of American Jewish organizations by expressing opposition or even disdain towards supporters of an improved egalitarian prayer space at the Western Wall (Kotel) in Jerusalem.

Culture and Sports Minister Miri Regev resigned as head of a panel responsible for changes at the prayer space on June 28, stating that her conscience would not allow her to approve the plan. It had been created in response to concerns from the Women of the Wall and Reform Jewish groups that men and women could not pray freely together at the wall under the current system.

“The Reform Movement’s demand to turn the Wall into a place where men and women pray together is unacceptable to me or to Jewish tradition,” Regev wrote on Facebook.

During a cabinet meeting after resigning, she also took a shot at Reform Jews.

Then in a rather odd turn of events, on July 4, after a series of earthquakes rumbled in northern Israel, a member of the Sephardic Orthodox Shas Party blamed the natural disaster on proponents of changing the status quo at the Kotel, saying they “are not Jews.”

“What do you have to do with the ancient stones of the Kotel?” Yinon Azoulay asked in reference to liberal Jewish movements during a Knesset debate. “I suggest that you take the money you invest in the State of Israel and build yourselves a Western Wall in the U.S.”

‘We Are Waiting … ’
Leaders of the Reform and Conservative Jewish movements said the Israeli leaders’ actions contribute to a widening gap between Israel and diaspora Jews.

“What we are seeing by members of the Israeli government is a wholesale dismissal” of Reform and Conservative Jews, stated Rabbi Steven Wernick, CEO of the United Synagogue of Conservative Judaism, which represents a network of congregations throughout the United States.

In June 2017, Israeli Prime Minister Benjamin Netanyahu suspended implementation of a plan that had been approved in January 2016 by various factions in Israeli, including ultra-Orthodox parties, to increase the size of a prayer space on the southern section of the Western Wall plaza known as Robinson’s Arch. There, men and women could pray together, and a single entrance to be built there would lead to three sections: a pluralistic one, and one each for men’s and women’s prayer.

“It’s not really a freeze; it’s a kill,” Wernick then told the Times of Israel. “It’s already been frozen. It hasn’t been moving for 18 months. We were waiting, and assured by the prime minister the entire time that negotiations were happening and they would get back to us. That hasn’t happened.”

Little has changed since then, but last month at the AJC Global Forum in Jerusalem, Netanyahu encouraged people at the conference to visit the pluralistic prayer space. “We’re enlarging it,” 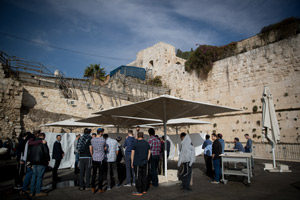 Jews pray at the mixed-gender prayer section at the Western Wall in Jerusalem’s Old City on Jan. 3, 2018. Photo courtesy of Yonatan Sindel/Flash90.

he said. “We’re making it accessible, so anybody can pray at the Western Wall.”

After the ministers resigned, the Knesset approved Netanyahu to head the committee, at which time he said that he would “deal with the Western Wall agreement myself.”

A Place For Israeli Jews
Rabbi Rick Jacobs, president of the Union for Reform Judaism, referring to Netanyahu, said “that’s a big responsibility, and one of the responsibilities is to not denigrate or delegitimize Jews of any stripe or expression, but particularly, the majority of the Jews on the planet,” who do not identify as Orthodox.

Members of the American Jewish community have placed increased importance on the ability to pray in a pluralistic fashion in recent years as groups like the Women of the Wall have attempted to wear prayer shawls and read from the Torah during services at the Kotel. Women of the Wall founder Anat Hoffman, Rabbi Jacobs and others have been harassed and arrested during the services.

On a recent  Friday, more than 150 Women of the Wall activists attempted to pray at the Western Wall but were met by Haredi Orthodox protesters who booed and shouted at them, and burned one of the group’s prayerbooks. Rabbi Susan Silverman, a member of Women of the Wall, said she is concerned that Israel could “become another theocracy in the Middle East that treats women as though they are not human.”

“Whether Miri Regev stays on the committee or leaves the committee is incidental,” said Silverman, an American native who lives in Jerusalem. “She is part of the problem in the sense that the people in power in our government are doing everything they need to do to keep themselves in power without a sense of vision for the active, liberal, vibrant democracy that we could be.”

Changing Stats
The Israeli government had also previously paid less attention to Reform Jews’ preferences for prayer at the wall because there were few Israelis who identified with the movement. Most were either Orthodox or secular. But Jacobs points to a 2017 URJ survey that found that 7 percent of Israelis now identify as Reform and 3 percent identify as Conservative. (A 2016 Pew Research Center survey found that only 3 percent of Israelis identify as Reform and 2 percent as Conservative.)

Jacobs argues considering that Haredi Jews, who have been the most vocal opponents of the Western Wall plan, make up about 10 percent of the Israeli population—compared with the figures for Reform and Conservative Jews—“we are not just talking about making a place for diaspora Jews; we are talking about making a place for Jews who live in Israel.” 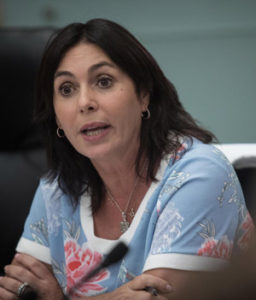 Minister of Culture and Sports Miri Regev attends a Culture, Sports and Education Committee meeting at the Knesset on July 2. Photo courtesy of Hadas Parush/Flash90.

Who Is Provoking Whom?
However, for others in Israel, the Western Wall issue also represents a wider debate over diaspora Jewry’s influence in regards to what some see as strictly internal Israeli affair of administering the holy site.

At the same time, those who support the Orthodox rabbinate’s administration of the Western Wall believe that they are merely asking visitors to behave in accordance with the traditions of the site and view groups such as the Women of the Wall as provocateurs.

Rabbi Avi Shafran, director of public affairs for the Orthodox group Agudath Israel of America, sees the plans for the prayer space at Robinson’s Arch as “as injuring the oneness of Klal Yisrael [the extended Jewish community].”

Still, on the comments regarding Reform Jews and the earthquakes in Israel, he stated to JNS that it’s “unwise and offensive for anyone, much less a [Knesset member], to imply that a natural event was the result of any particular thing. Non-Orthodox Jews who were born to Jewish mothers are as much our brothers and sisters as any Jew.”

Will P.M. Do What’s Right?
Jacobs, who visited Israel last month, said the Reform movement was not “walking away from Israel” and is “deeply committed to its well-being.”

With Netanyahu having frozen the agreement a year ago and now saying that he would implement the plan himself, “it really frankly falls on him … and we expect him to do what’s right for the State of Israel and for the Jewish people.”

Wernick said he was unsure what actions his movement can take “other than formally lodging our complaint.”

“We seem to care more about Israel than Israel cares about us, but that’s sometimes what you do with family,” he said. “We are going to continue to build our movement in Israel and lobby for what we think is right in the Knesset.”

The U.S. Embassy in Jerusalem will cost $21.5 million for upgrades. Trump had estimated $250,000.
Barbecue competition on July 29 to benefit The Shalom Food Pantry