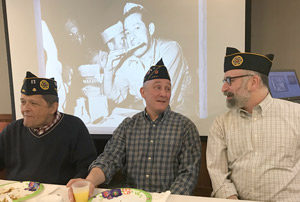 By BOB MICHAELS
Passover has been celebrated in the U. S. military since the Civil War, when both opposing armies held seders, undoubtedly attended also by non-Jewish soldiers.  “Seders In Service” was the theme of a recent panel at a Temple Gates Brotherhood Breakfast-and-A-Speaker Program event.  The panel was led by retired Army Captain Paul Zonderman, a Vietnam War veteran and now commander of Jewish War Veterans (JWV) Post 106 in Schenectady.

World War 1.  Army National Guard Col. Richard Goldenberg, commander of JWV Post 105 in Albany and also of the JWV Capital District Council, presented a slide show of seders in service from World War I to the present. Seders during WWI were ornate, and attended by hundreds of service people. The military then treated seders as critically important, and devoted extensive financial and logistical resources to acquiring needed foods and bringing Jewish service people to the seders. The seders also were supported privately, via donations  by the Jewish Welfare Board.

Vietnam War.  One of Goldenberg’s slides depicted a Jewish chaplain named Greenspan in Vietnam in 1967. In the Korean and Vietnam Wars, service people could not be pulled from frontline positions. Military logistics therefore switched from bringing soldiers to seders, to bringing seders to the soldiers, usually a small number at a time.

In a coincidence, retired Vietnam War veteran Capt. Al Finkel ,who was attending the program was startled to see Greenspan, as he had known Chaplain Greenspan well.  Finkel also related the coincidence of being reunited with Greenspan, who had moved to Israel when he visited Israel with his wife in 2004 or 2005. He had crossed paths with the now-white-bearded Greenspan, who recognized him although nearly four decades had separated them.

Lt. Col. Lance Wang, an Iraq War veteran and now a member of JWV Post 105, had a different experience.  He said he was “in service for five years before I even met a rabbi.”  While in training as an armory officer, he phoned his mother.  She sent kosher food to him in a styrofoam cooler so that he could celebrate Passover.

No war.  One attendee was Army National Guard Major Jordana Mallach, a logistics officer who had traveled to Temple Gates from Saranac Lake. She recalled a Passover many years earlier at Fort Leavenworth in Kansas.  It was richly supported after the Army had defended unsuccessfully a lawsuit claiming too little support being devoted to “low density faiths,” including the Jewish faith.  She was awarded $2000 for Passover foods, and logistics support to collect attendees. As guaranteed by the Army, the seder was very well attended, though mostly by non-Jews!

The Arava continues to produce new discoveries in the desert
Israel’s Tourism Triumph—Part I of IV: The Air Bridge