Jews must speak out against prejudice toward Asian Americans 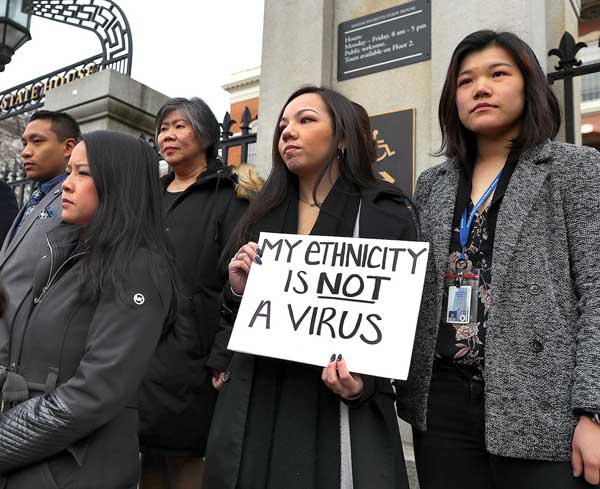 Members of the Asian American Commission hold a press conference on the steps of the Massachusetts State House to condemn racism towards the Asian American community because of coronavirus on March 12, 2020 in Boston. Photo courtesy of John Tlumacki/The Boston Globe via Getty Images.

In the U.S., racist and xenophobic outbursts, assaults and discriminatory practices against Asian Americans have been reported from coast to coast. Chinese restaurants are witnessing 30 to 80 percent drops in business. Misinformation about COVID-19 is rampant on social media. Blaming or insinuating that Asian Americans are somehow responsible for, or even connected to the pandemic is outrageous and inflammatory.

Asian Americans, especially Chinese Americans, have been consistent friends of Jews in the United States — and as a minority group that has been a consistent scapegoat throughout history, Jews have a particular obligation to speak out.

In 1903, when a pogrom erupted in Kishinev, the Chinese community reached out, unprompted, to offer financial aid and solace. This anti-Semitic violence spurred the founding of the American Jewish Committee. This was neither the start nor end of this relationship. In many cities throughout the United States, Jewish and Chinese communities have lived and flourished side by side, and recent incidents have shown those ties to be tried and true.

In the wake of the deadly shooting at Pittsburgh’s Tree of Life synagogue in 2018, the United Chinese Americans, along with various chapters and partners, delivered a show of support from over 100 Chinese-American organizations. Chinese Americans joined Jews for the ensuing “Show Up for Shabbat” campaign organized by AJC, and stood with us in synagogues across the country. After a rise in anti-Semitic attacks in New York and across the country toward the end of 2019, organizations like the America China Public Affairs Institute spoke out firmly against anti-Semitism and affirmed something that American Jews have long understood: An America that is perilous for one minority is unsafe for all.

In our conversations with Chinese-American partners, we have denounced racist accusations of dual loyalty often targeted toward Chinese-American scholars and researchers, a sentiment that we are all too familiar with in this country and abroad. We have also worked with Asian-American organizations and members of Congress to address the impact of social and political polarization in America for Diaspora communities.

In 2011 and 2012, AJC partnered with Chinese-American and other Asian-American groups in pushing for passage of Senate and House resolutions expressing regret for congressional approval of the discriminatory Chinese Exclusion Laws dating back to 1879 and 1904.

In response to coronavirus-related incidents, 72 Jewish organizations signed a  letter expressing our support for the Chinese and Chinese-American communities. We have publicly displayed our solidarity to Chinese diplomatic posts and local Asian American communities in Washington, D.C., Houston, Philadelphia, New York and elsewhere. We have met with partner organizations to discuss ways in which we may tackle these issues together and publicly convey that COVID-19 is not the problem of any individual ethnicity.

American Jews also recognize that as important as words are, they must be reinforced with action.

Jewish communities across the country should discuss how best to support our Chinese-American and other Asian-American friends. We should speak up if we hear racist rhetoric. We should intervene in and report discrimination. We should work with partners to address public misconceptions, and with local, state and federal governments to ensure a spotlight on discrimination.

Our Chinese-American friends have quoted to us a pertinent proverb: “It is when you are suffering or in crisis that you learn who your real friends are.” The American Jewish community must be those real friends.