Jews of color on what Martin Luther King Jr. Day means to them in 2019 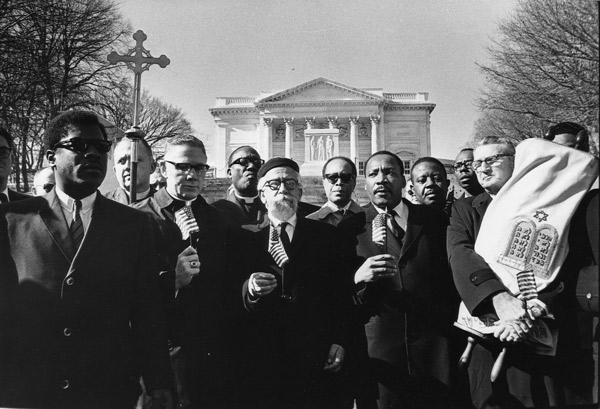 By JOSEFIN DOLSTEN, BEN SALES
NEW YORK CITY (JTA) –For many Jewish organizations, Martin Luther King Jr. Day is a time to talk about the current state of black-Jewish relations. There’s a lot to talk about this year, from the controversy over ties between Women’s March organizer Tamika Mallory and Louis Farrakhan, to common cause over the rise of white supremacism, to an issue of Commentary magazine that took a pessimistic view of the relationship between African-Americans and Jews.

But for those members of the Jewish community who also identify as black, it’s more complicated than whether the “relationship” is good or bad, up or down.

JTA asked several Jews of color to share their thoughts on Martin Luther King Jr. Day. Their responses range from reflections on their family histories to takes on the Women’s March controversy and race relations in the United States. Here are several answers via e-mail, which have been lightly edited for grammar and style and in some cases space considerations,

Marcella White Campbell is marketing director for Be’chol Lashon, an organization that educates about diversity in the Jewish community.

Recently, I brought my children to the Lincoln Memorial, so that they could stand on the stairs with President Abraham Lincoln at their backs and look out over the Reflecting Pool. I wanted to bring to life for them the black-and-white footage of Martin Luther King Jr.’s “I Have A Dream” speech. In our fast-paced society, moving further and further into the future, it’s easy for them to believe that the civil rights movement happened a long time ago. Walking in the footsteps of King, they were able to understand how recently all this occurred, how recently my husband, a white Ashkenazi Jew, couldn’t even have married a black woman like myself in states across the U.S.

Ben Faulding is a social work student and activist who lives in New York.

The story of the Jew in America has been one of triumph. After many generations of slaughter and oppression we are flourishing. Anti-Semitism is the chronic syndrome we have never full eliminated, but we are (mostly) full participants in a society that had been developing for nearly 300 years. This society was built on the backs of others. Even those who have not directly participated in that oppression have enjoyed its fruits. African-Americans, however, are still hobbled by past and current discrimination and violence. We must acknowledge this.

Which brings us to today. I don’t begrudge your hesitation, your discomfort and hurt at participating in a movement that brings you discomfort. That you are entitled to. I am disturbed by many of the so-called allies who demand that people like Tamika Mallory and Linda Sarsour fall in line and offer themselves on the altar of public accountability. What you are not entitled to is performative penance. Just to make this clear. In this fight, white Jews are allies. Linda Sarsour has been known to say “do not center yourself in the fight for someone else’s liberation.”

King was very vocal in his opposition to anti-Semitism, and I believe he would have condemned Minister Louis Farrakhan. But it wouldn’t end there. He condemns not only the riots, but the conditions. Support for the Nation of Islam did not develop out of thin air. Farrakhan heard the voices of the unheard. And until you are willing to fill the role and guard the bodies of black women, protect the futures of black children, you have no right to make demands. You are out of line to demand that the vulnerable adhere to your conditions until their promises of freedom and justice have been met. You must serve; not be served.

Tamar Manasseh is the founder of MASK, an organization that combats gun violence in Chicago.

I can’t speak for anyone else, but this Jew of color will be hosting a discussion in Chicago about how to build bridges between Jews of all colors. For too long, the American Jewish community has turned a blind eye to some uncomfortable truths about ourselves; we cannot afford to ignore them any longer. Our discussion will be the first in what will hopefully become a national conversation about how to strengthen our community and face the challenges of being Jewish in 21st century America.

Rebecca Pierce is a filmmaker, writer and activist.

On this Martin Luther King Jr. Day, I’m struck by both the strength of the bond between black and Jewish communities, and how painfully far we still have to go in reconciling the intersections between them. I grew up on stories of Jewish participation in the civil rights movement, including my father’s rabbi, Arnold Jacob Wolf, marching in Selma and hosting Martin Luther King as a speaker at his temple at a time when King was seen as an extremist and not the ubiquitous icon he is today.

These stories of risk-taking solidarity meant everything to me as a black and Jewish kid who didn’t see any contradiction in being part of both communities. But as an adult, I’m finding that stories aren’t enough. The coalitional civil rights organizing of our current moment raises challenges we must learn to face together with grace and accountability rather than avoidance and the politics of disposability. We can’t dismiss every voice that challenges us, whether on issues of race or topics as fraught as Israel and Palestine. We can argue, we can push back, we can try to educate, but we must also be willing to learn and grow in the process.

As the voices of Jews of Color and issues of race in the Jewish community come to the fore, we are seeing a shocking backlash from some who want to avoid uncomfortable questions that risk pushing needed voices out of our communities. This Martin Luther King Jr. Day we can honor the legacy of a man who gave his life for freedom by showing up for one another, sitting with the discomfort of our shared challenges, and having faith in ourselves and each other to fight for what’s right, even when it isn’t easy.

Rabbi Shais Rishon, also known as MaNishtana, is an activist and author who has written about racism in the Orthodox community.

As Martin Luther King Jr. Day arrives yet again, and in a year that has seen so much toxic gate-keeping (usually surrounding dissenting Jewish voices of color), demands for sweeping condemnations from non-Jewish communities while simultaneously not holding the same level of censure for ill-behaving Jewish figures, and a general refusal to acknowledge instances where — despite “ally-ship” — American Jewry can be complicit in the very same ideologies many Jewish fled from, a particular quote can’t help but come to mind from Dr. King’s “Letter from A Birmingham Jail”:

First, I must confess that over the past few years I have been gravely disappointed with the white moderate. I have almost reached the regrettable conclusion that the Negro’s great stumbling block in his stride toward freedom is not the White Citizen’s Council-er or the Ku Klux Klanner, but the white moderate, who is more devoted to “order” than to justice; who prefers a negative peace which is the absence of tension to a positive peace which is the presence of justice; who constantly says: “I agree with you in the goal you seek, but I cannot agree with your methods of direct action”; who paternalistically believes he can set the timetable for another man’s freedom; who lives by a mythical concept of time and who constantly advises the Negro to wait for a “more convenient season.” Shallow understanding from people of good will is more frustrating than absolute misunderstanding from people of ill will. Lukewarm acceptance is much more bewildering than outright rejection.

Rabbi Isaiah Rothstein is the founder of Union Street Sanctuary, a Jewish social organization in Brooklyn, and the rabbi-in-residence at Hazon and Be’chol Lashon.

Martin Luther King Jr. Day and Tu b’Shevat help us tap into nuance the way many Jews of Color live with each day. I recall the moment Barack Obama became president like it was yesterday. My mother, a black convert to Judaism, sat in front of the TV screen with tears of joy. Once named Tanya Maria Robertson, now Shulamit Geulah Rothstein, my mother was raised in Chicago during the civil rights era. Carol Robertson, one of the girls murdered in the Birmingham church bombing of 1963, was her cousin. My father, raised in a secular Jewish home in New York, became a religious Jew, a Lubavitcher, a Chasid of Rabbi Menachem Mendel Schneerson, the Chabad rebbe.

I grew up knowing my ancestors were slaves during the Passover seder, both in Egypt and in America. I have freedom songs and Chabad niggunim harmonized with the melodies of dual worlds of cacophonous beginnings that end in a symphony of love and celebration.

Martin Luther King Jr. Day has always been a holiday for me because although it took more than one person to bring my parents together, this day represents the story of American liberation during a period of oppression and deep hatred. Martin Luther King Jr. Day is a holiday for me because my American roots as a Jew of a color hold complex collisions of multiple worlds and perspectives. This holiday allows me to reflect, as Dr. King did, that “the arc of the moral universe is long, but it bends toward justice.”

Anthony Mordechai Tzvi Russell is a musician who recently released an album in which he blends traditional Yiddish and African-American music.

In Jewish prayer it is unusual to address God without the accompanying litany of patriarchs and matriarchs whose direct relationship with the divine dignify our own earnest fumblings toward eternity. Likewise, we can proudly point to Rabbi Abraham Joshua Heschel, whose close relationship with the Rev. Martin Luther King Jr. in the collaborative struggle toward racial equality continues to inspire today. You — yes, you, now — needn’t stop uttering the litany of names; neither should you fail to proudly point to the inspiring ancestor. But please — do something. Get involved in this continuing struggle. Be the person future Jews will proudly point to.

Isaama Goldstein-Stoll is a fifth-year rabbinical student at the Hebrew Union College-Jewish Institute of Religion in Cincinnati.

Judaism has perfected the art of using memories of the past to stir and nurture the consciousness of those in the present. In our tradition, memory keeps the past alive and makes the experiences of the past our own. On this Martin Luther King Jr. Day, my fear is that, despite all we hear about how Rabbi Abraham Joshua Heschel marched with King, we have not done enough to cement the civil rights movement into our collective memory as Jews. But as King himself said, “more often than not fear involves the misuse of imagination.” The Jewish world I imagine for the future is one in which the call to dismantle systems of injustice is alive in our memory. The world I am working to create is one in which Jewish institutions actively work to overcome inequality and racial tension both within the Jewish community and in the broader world. For many Jewish organizations, Martin Luther King Jr. Day is a time to talk about the current state of black-Jewish relations.