John Lewis and the Jews: An enduring alliance 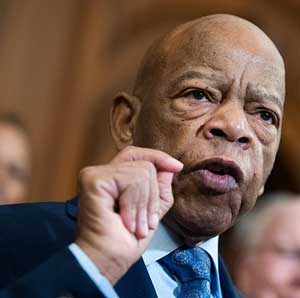 By RON KAMPEAS
WASHINGTON (JTA) – When John Lewis, the civil rights icon and congressman from Georgia, died at 80 on July 17, Jews in America and abroad lost an ally of nearly six decades.

Lewis never tired of telling folks to “get into good trouble,” to defy the authorities and the conventional wisdom. It was a creed that guided him as he helped organize the 1963 March on Washington; that led to police severely beating him in Selma, Alabama, in 1965; and that underscored his 33-year career in Congress.

He also had a close relationship with the Jewish community dating to the 1960s, fortified by alliances he forged throughout his congressional career. Many Jewish leaders on both sides of the aisle lauded Lewis when he announced his cancer diagnosis last year and mourned his recent death .

Here are six Jewish moments from Lewis’ long and storied career working toward justice in America.

Praying With His Feet
That Selma March. It started with 12 men and women joining arms and leading others across the Edmund Pettus Bridge. Among those 12 were Martin Luther King, Jr. and Rabbi Abraham Joshua Heschel. The rabbi was asked after the march whether he found time to pray. Heschel famously answered: “I prayed with my feet.” Lewis, then 25, was alongside them.

Coalition-building
There’s a narrative that the unity that defined the Black-Jewish alliance in the 1960s dissipated by the 1980s, in part because black leaders like Andrew Young and Jesse Jackson vocally embraced advocacy for Palestinians.

If that was the narrative, Lewis did not seem to be reading the book. In 1982, he worked with the American Jewish Committee to found the Atlanta Black-Jewish Coalition. It was an alliance that culminated in 2019 in the founding last year of the Congressional Black-Jewish Caucus.

Let My People(s) Go
Jews have been hesitant at times to link Jewish suffering with that of African Americans. Lewis was not. At a mass Washington demonstration in 1987 calling for the liberation of Soviet Jewry, Lewis did not hesitate to make the connection.

“I stand here not so much as a member of Congress but I stand here as a human being,” Lewis said. “Almost 25 years ago I participated in a march here for jobs and freedom. Hundreds and thousands of members of the Jewish community marched with us then. I think it’s fitting for me to be with you today.

Spurning Farrakhan
In 1995, Nation of Islam founder Louis Farrakhan set out to convene black men in Washington, D.C., at a rally meant to extend the symbolism of the 1963 March on Washington.

Some prominent figures from the civil rights movement attended the Million Man March on Washington, including Rosa Parks, but Lewis said he would not because of Farrakhan’s track record, which then as now included anti-Semitic comments.

“I cannot overlook past statements by Louis Farrakhan — and others associated with the Nation of Islam — which are divisive and bigoted,” Lewis told Newsweek at the time. “Although its general goal of encouraging African American men to be responsible is sound, the march is fatally undermined by its chief sponsor.”

Boehner, who had not consulted with Democrats in Congress or the White House about the invitation, framed Netanyahu’s speech as a more serious take on Iran, and members of the Congressional Black Caucus saw it as an all-too-familiar dis: The white man was pushing the black man out of the limelight.

Pro-Israel groups and figures also had been caught by surprise by the invitation; nonetheless, the prospect of a boycott appalled them, and they set about trying to persuade Democrats to turn up. Lewis would not have it — but he emphasized his support for Israel in his decision not to attend the speech.

“I am saddened that the speaker would threaten this historic position, bipartisan support of our Israeli brothers and sisters, by this action,” he said.

Israeli officials joined the chorus of worldwide leaders mourning Lewis. “The U.S. lost a hero. Israel lost a friend,” tweeted Dani Dayan, the outgoing consul general of Israel in New York, along with a picture of a 2015 tweet from Lewis himself saying, “I don’t take a backseat to anyone in my commitment and support of Israel.”

The Right To Boycott
Lewis was opposed to the movement to boycott Israel, but — his thoughts cast back to the business boycotts that helped propel the civil rights movement — he was fiercely defensive of the right to boycott.

He opposed state laws and proposed federal laws that would penalize boycotters and joined two freshmen congresswomen who back the movement to boycott, divest and sanction Israel in sponsoring a resolution affirming the right of Americans to boycott, a resolution centrist pro-Israel groups lobbied against.

Co-sponsoring the resolution was “a simple demonstration of my ongoing commitment to the ability of every American to exercise the fundamental First Amendment right to protest through nonviolent actions,” he said at the time.

“I want to make it very clear that I disagree strongly with the BDS movement,” Lewis said in the same statement. He put his words in action, co-sponsoring a resolution that condemned but did not penalize the BDS movement.

By JACKSON RICHMAN
(JNS) – Israel-related and Jewish communities expressed their condolences over the passing of civil-rights icon and longtime congressional Rep. John Lewis (D-Ga.) on July 17 after a six-month battle with pancreatic cancer.

“It is with inconsolable grief and enduring sadness that we announce the passing of U.S. Rep. John Lewis,” his family said in a statement. “He was honored and respected as the conscience of the U.S. Congress and an icon of American history, but we knew him as a loving father and brother. He was a stalwart champion in the ongoing struggle to demand respect for the dignity and worth of every human being. He dedicated his entire life to non-violent activism and was an outspoken advocate in the struggle for equal justice in America. He will be deeply missed.”

Although Lewis, who represented Georgia’s 5th Congressional District from Jan. 3, 1987 until his death, sent mixed signals when it came to Israel, such as co-sponsoring a resolution for and against the anti-Israel BDS movement, he was known to be a friend of the Jewish community.

He spoke out against Louis Farrakhan, saying that the Nation of Islam leader’s rhetoric was “divisive and bigoted.” Lewis refused to join Farrakhan’s 1995 Million Man March in Washington, D.C.

In a statement, officials at the Jewish Federations of North America noted being “heartbroken to learn of the passing of John Lewis, our longtime friend and partner. With unshakable commitment and determination, Congressman John Lewis reminded us every day of the power of gentleness, humility and optimism. He risked his life in the name of racial justice, helped lead the historic march from Selma to Montgomery, and served as a member of Congress representing the people of Georgia for 33 years.

“America is better off because of John Lewis,” they continued, “and his legacy will live on forever in the many people he inspired to live up to his example.”

“From the [1963] March on Washington to Black Lives Matter, Rep. John Lewis committed his life to the fight for justice and equality,” said World Jewish Congress president Ronald S. Lauder in a statement. “He led by example, from his commitment to nonviolent protest to his unflinching belief in our nation’s capacity to become a more perfect union.”

“Through it all, he understood the importance of building bridges of empathy between communities. He was a lifelong ally of the Jewish people, a loyal supporter of the State of Israel, and a vigilant voice against anti-Semitism,” said Lauder. “At a time when some nefarious forces are stoking division between the black and Jewish communities, we should look to the model that John Lewis set for us and remember that black-Jewish unity is the best way to achieve justice for both peoples.”

‘An unwavering ally of the Jewish community’

Democratic Majority for Israel said in a statement that Lewis, who was one of 10 children born to sharecropper parents, “risked his life to make America better, and we are forever grateful for his moral leadership and his tireless fight for a more just society.”

“Although we lost him at a time when we need him so much, he’ll continue to be an example to all of us. Congressman Lewis built deep ties with the Jewish community as partners in his righteous fight for civil rights,” it said. “In an iconic photo, Mr. Lewis walked with Rabbi Abraham Joshua Heschel and Dr. Martin Luther King Jr. in the 1965 March on Selma.”

That march led to the passing of the 1965 Voting Rights Act, which eliminated systemic barriers for black voters.

“John Lewis inspired us to do better, as Jews and as Americans. He will forever inspire us to continue the fight for racial justice and to build a better future for the next generation. He will be deeply missed,” tweeted the Jewish Democratic Council of America.

John Lewis inspired us to do better, as Jews and as Americans. He will forever inspire us to continue the fight for racial justice and to build a better future for the next generation. He will be deeply missed. https://t.co/KpPwDGvvMz

“Lewis set an example for our country that will long outlive him. His work for equality had profound effects on the lives of not only African-Americans, but other minority groups, like American Jews,” Republican Jewish Coalition spokesperson Neil Strauss told JNS. “For that, all Americans owe Lewis a debt of gratitude. We hope that Lewis can rest in peace knowing he made the world a better place.”

The American Israel Public Affairs Committee (AIPAC) called Lewis “a heroic fighter for justice and human dignity” who was a “steadfast ally of the Jewish state who was instrumental in gaining passage of The Jerusalem Embassy Act” in 1995.

“Freedom has lost a powerful ally and the pro-Israel community has lost a stalwart friend,” said AIPAC in a statement. “We extend our condolences to his family, his colleagues and all those who were inspired by his extraordinary life of bravely striving for justice.”

“We are deeply saddened by the passing of our friend Congressman John Lewis. History will rightly record his tireless pursuit of justice, his bravery, his statesmanship and his unending selflessness and kindness,” tweeted J Street.

We are grateful for the wisdom @repjohnlewis shared, the inspiration he provided and the example he set. Our country has yet to fully comprehend the wrongs that he set out to right — nor the magnitude of the gift he gave us by doing so. May his memory be a blessing.

“Congressman Lewis was truly a larger-than-life figure who will be dearly missed by all,” wrote the Conference of Presidents of Major American Jewish Organizations. “He will be remembered for his courage, perseverance and faith in America. He leaves a legacy which will stand the test of time.”

In a mass email, the Jewish Council for Public Affairs stated that Lewis “was an unwavering ally of the Jewish community. His most sincere, heartfelt love was for humanity. Not only HIS people, ALL people seeking justice” stated Lois Frank, past JCPA chair and a friend of the Congressman for many years. “For a man of such celebrity, this humble and gracious spirit prevailed. His neshama [‘soul’] was pure … one of a kind.”

Lewis is survived by his son, John-Miles Lewis. He was predeceased by his wife, Lillian, who died in 2012.