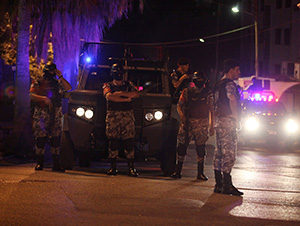 Policemen are seen near the Israeli embassy in Amman, Jordan July 23, 2017. REUTERS/ Stringer

JERUSALEM (JTA) –The members of Israel’s diplomatic mission in Amman, Jordan, including a security guard who shot and killed his teenage assailant and a bystander, are back in Israel.

The embassy employees, who had been confined to the embassy compound all day Monday, July 24, following the stabbing attack Sunday evening by a 17-year-old and subsequent shooting, returned late Monday through the Allenby Bridge.

In a statement issued shortly after 11 p.m. Monday, the Israeli prime minister’s office said their return “was made possible by the close cooperation that took place in the last 24 hours between Israel and Jordan.”

The head of the Israel Security Agency, or Shin Bet, Nadav Argaman, traveled Monday to Jordan in an effort to diffuse the crisis.

Israel’s Security Cabinet met for several hours Monday evening in an effort to resolve the crisis over security measures on the Temple Mount and the escalating diplomatic crisis with Jordan.

In the attack Sunday, the assailant entered a residential building occupied by the embassy to install furniture and stabbed the Israeli guard with a screwdriver. The guard shot and killed the assailant. The building’s owner, who was standing nearby, was killed after being hit by a stray bullet.

Jordanian police had demanded to question the guard, while relatives of the stabber called for the death penalty. The embassy refused to turn the guard over to the Jordanians for questioning, saying he had immunity.

Jordanian security forces reportedly held mobs of protesters who had gathered at the embassy at bay following the incident.

The Israeli media reported that the government is considering removing the metal detectors and replacing them with high-tech security cameras, and is aiming to make the changes before Friday, the busiest day at the site for Muslim prayers.

The cameras reportedly would be located a distance away from the gates into the site, so as not to offend the worshippers, who have been protesting the metal detectors by refusing to enter the sites and holding worship services at the gates, leading to clashes with Israeli security forces that have killed at least five Muslims.