Jordanians give substantial control of the Temple Mount to Palestinians 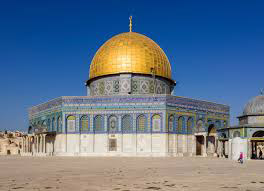 (JNS) – Jordan has expanded a council that administers Muslim institutions on the Temple Mount, giving Palestinians 40 percent of the seats for the first time in a body previously reserved for trusted individuals close to the monarchy of Jordanian King Abdullah Hussein.

According to a report by Haaretz on Monday, Feb.18, the Jordanian government enlarged the Waqf religious trust to include Palestinians, who will now have a significantly larger say on  what is the site of  the two Jewish Holy Temples: the Dome of the Rock and the Al-Aqsa mosque.

The seven Palestinians appointed to the council will increase the body from 11 to 18 seats, and includes religious and political leaders from Arab neighborhoods in eastern Jerusalem.

The expanded group met on Feb. 14 on the Temple Mount near Sha’ar HaRachamim (“the Gate of Mercy”), which was sealed off in 2003 by Israeli security officials due to illegal construction by the Waqf and management by individuals tied to Hamas that allegedly led to the destruction of rare and priceless antiquities from the time of the Temples. They subsequently entered the restricted area and prayed, without any injunction from Israeli authorities, except for calling Waqf head Sheikh Azzam al-Khatib al-Tamimi in for questioning.

The interrogation was subsequently canceled due to pressure from Jordan, according to Haaretz.

On Monday, the Waqf called on Muslims to converge on the building adjacent to Sha’ar HaRachamim for a mass-protest prayer rally. Several Arab men proceeded to kick down the gate and illegally infiltrate the building, upon which Israeli police rushed the building and arrested five people in the resulting clashes.

In response, Israel closed the Temple Mount on Monday afternoon, a move that resulted in a letter from the Jordanian foreign ministry chastising Israel, and demanding the reopening of the gate and the removal of all Israeli security personnel.

Palestinian Authority leader Mahmoud Abbas accused “Israeli occupation authorities” of “temporal and spatial division of the mosque,” and said he was “warning it against its continued repressive and arbitrary policies, which will only lead to repercussions and fuel the feelings of the Palestinian people.”

He did not elaborate on which repercussions Israel would face.