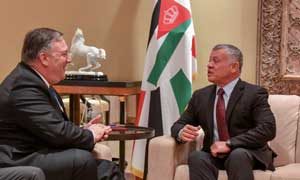 By ISRAEL KASNETT
(JNS) – At the recent Washington Institute for Near East Policy dinner, White House senior adviser Jared Kushner voiced confidence in his upcoming proposal to resolve the seemingly intractable Arab-Israeli conflict, calling it “realistic” and “executable.” While the plan has been a tightly kept secret since its inception, rumors have been swirling about as to what it contains.

Jordan’s King Abdullah II is nervous that he will lose his custodianship of the Temple Mount as part of the plan, and he has therefore declared that “Jerusalem is a red line, and we won’t change our stance. It is our duty to protect the Muslim and Christian holy sites in Jerusalem.” According to the 1994 peace agreement between Jordan’s King Hussein and Israel, Jordan is the guardian of the Islamic holy sites in Jerusalem.

The Temple Mount remains a flashpoint between Israel and Jordan.

Compromise?
On Feb. 22, Jerusalem’s Wakf Islamic religious trust opened a building near the “Gate of Mercy” (Christians refer to it as the “Golden Gate”), which Israel had closed in 2003 because of illegal activities conducted there by a Hamas-linked group. Thousands of Palestinian protestors stormed the gate, located in the northeastern part of the Temple Mount, and forced it open. Shortly afterwards, Israel arrested a senior Wakf official, subsequently releasing him.

Abdullah Swalha, founder and director of the Center for Israel Studies in Jordan, told JNS that this crisis has two components. “The first,” he said, “is the crisis over the Bab al-Rahma [Arabic for “Gate of Mercy”] and the second is the crisis over the demands by the religious parties in the new Knesset to increase the numbers of religious Jews who intend to ascend the Temple Mount.”

He said that it’s a waiting game for now; the Israeli court will decide to either close the gate or reach a compromise with the Jordanian Waqf.

“In both scenarios, we need to find a workable solution,” he said.

Taking It Out Of Limelight
Joshua Krasna, an expert on strategic and political developments in the Arab world at the Jerusalem Institute for Strategic Studies and a senior fellow in the Foreign Policy Research Institute, told JNS that the Bab al-Rahma issue seems to have “moved to a more discreet level,” involving intermediaries appointed by the Jordanian king and the Israeli prime minister, “and not through regular diplomatic or government channels.”

The reason for this is because, as Krasna pointed out, both Israel and Jordan understand that “exposure and transparency are not necessarily useful here since the Jordanian population is much less committed to the peace treaty—and much less aware of its significant security and other benefits for Jordan—than the leadership and the security elite.”

Krasna said Abdullah has taken “a much more active and public role as ‘Defender of the Holy Places in Jerusalem,’ ” largely in order to “cement his domestic legitimacy and Islamic bona fides as a descendent of the Prophet, especially in view of efforts by Turkey, Saudi Arabia and Hamas to make inroads on the Temple Mount.”

Rejection Of Temple Mount Status
According to Krasna, these reasons, to a large extent, are what compel Abdullah to be more outspoken and to take, from Israel’s point of view, “problematical positions” on the Temple Mount issue.

“We want to avoid a rhetorical escalation that would be difficult to climb down from,” he added.

Regarding demands by religious parties to allow more Jews to ascend the Temple Mount, Swalha warned that it could cause another escalation between Muslims and religious Jews. While the international community often focuses on equality and freedom for Palestinians, no one ever seems to be concerned that Jews and Christians still do not have the right to practice their religion on the Temple Mount—a site important to all three major religions.

“From a Jordanian perspective,” said Swalha, “this will undermine and change the status quo, and Jordan would most likely refuse to make any concessions.” Jordan is wary of the plan expected to be presented by the White House in June, after the Muslim month of Ramadan.

“Only A Vision”
Swalha said “we don’t know exactly what this plan contains regarding Muslim and Christian holy shrines, and Jordan will reject the plan” if it changes or undermines Abdullah’s position as custodian.

“We will not pre-judge the plan,” added Swalha. “We must wait to see and read it, and then decide what our response will be.” He pointed out that the plan “is not a treaty or an agreement,” but rather “a vision for peace and prosperity for the region.”

“No one will force anyone to sign anything,” he said. “We can reach some compromises over the critical issues.”

Swalha assessed that the Palestinians “will reject the plan, as will the Jordanians. The question is what comes after.”

Like Israel, Jordan is worried about stability in Judea and Samaria, as well as the ability of the P.A.’s sustainability to function.

Another of Jordan’s concerns is that if the plan is rejected, the U.S. will end efforts to resolve the Arab-Israeli conflict since the administration has no shortage of important priorities.

Pessimistic
“In this scenario,” said Swalha, “we will live with the status quo in which Israel is the main beneficiary.”

Krasna pointed to reports that the plan calls for the Saudis to administer the Muslim holy places, “which would be a red flag for the Jordanian leadership, who have put their ‘guardianship’ of Jerusalem in a central place in their prestige and standing in the region.”

He added that it is difficult to see the benefits of giving an important role to a fundamentalist Sunni regime, “which has actively supported radical Salafi movements in the recent past and whose friendship with Israel is new and, unlike our relationship with Jordan, hardly tested.”

Sharing the same low expectations as the Israeli public, Krasna believes that not much will change when the “deal of the century” is introduced, saying the plan is a “will-o’-the-wisp.”