Julian Edelman says he is studying for his bar mitzvah 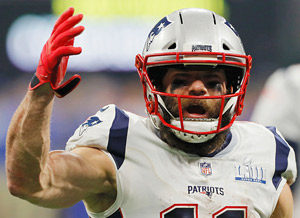 Edelman told Los Angeles Magazine before the start of a Ruderman Family Foundation dinner that he is going to have a bar mitzvah in Los Angeles “soon.”

“I speak with a rabbi every Friday. He’s from out here,” Edelman said.

Edelman, 33, also said he has attended synagogue during the football season.

He is one of only a few Jewish players in the league, embracing that side of his identity over time.

Before the Super Bowl in 2012, Edelman acknowledged that he has a Jewish father and his mother is not Jewish. He was not raised in the faith.

“I’m kind of Jewish but not really,” he said at the time.

But since then he has shown his Jewish pride on a number of occasions. In a 2014 game, for instance, he wore a pin featuring the Israeli flag. He has tweeted about Jewish holidays. He even went on a Birthright-style trip to Israel, and has written a children’s book that references modern-day Zionism founder Theodor Herzl.

After the Pittsburgh synagogue shooting in the fall that killed 11, he wore special cleats with Hebrew on them to honor the victims. And in December he wore custom cleats to support the Israel Baseball Association. They were auctioned off to raise money for the cause.

Edelman did not specify a date for the bar mitzvah. His business partner Assaf Swissa said they were working on “something big” involving the bar mitzvah and preferred not to reveal more, according to the report.