“Just a little bit of light…” 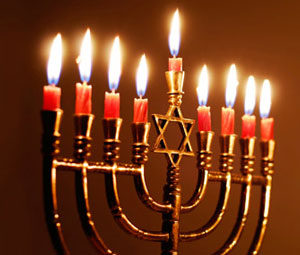 By RABBI TZVI HERSH WEINREB
There is so much to say about Chanukah. One hardly knows where to begin.

First of all, there is the history. It is recorded in the Talmud, but the historical details contained there are scant: a persecution, a military campaign, a victory, a miracle.

Much more is recorded in the extra-biblical texts known as the Books of the Maccabees, of which there are four. These texts are not at all part of our Tanach, and although the first two were definitely written in Hebrew, the original texts were lost and were preserved by non-Jews in Greek translation. Because these works are part of their Bible, many Christians, particularly Roman Catholics, are much more familiar with these works than are most Jews.

Nevertheless, there is much of interest in these books, and the central heroes such as Matityahu and his sons come alive in them. Their amazing courage, their self-sacrifice, their piety, and their very impressive military skills are all sources of great inspiration, and for that reason alone these works deserve to be read.

Of course, when we read these books, we come to realize that, technically, it was not the Greeks that the Hasmoneans (Chashmonaim) were fighting, but rather the Greek-influenced Syrians of the Seleucid dynasty.

That brings us to a second major topic of importance, and that is the ideological conflict between the Hasmoneans and the culture of Helenism. To this day, books about the history of religion speak of the great difference between the world-view of Athens and the religion of Jerusalem. Suffice it to say that Athens placed the emphasis upon the body whereas the soul is emphasized by Jerusalem.

Beyond Rules And Regulations
Then there are the halachot of Chanukah, the laws and customs, which focus mainly, although not exclusively, upon the miracle of the oil discovered in the Holy Temple, which miraculously burned for eight nights although the amount of oil discovered was only sufficient for one night.

So much is written about how many candles to light, where to light them, who lights them, how long they must remain lit, and what people must do if they are not at home and must light candles at the home of their hosts or while they are traveling.

Finally, Chanukah has special foods and songs and even games, all of which add to the uniqueness and singular attraction that this holiday has for Jews of all ages and all backgrounds. All are very important. But I want to stress the central message of Chanukah, which, for me at least, is at the core of the holiday. It is a message for every one of us and has particular relevance in our times and in our current circumstances.

Deceptively Simple
This message is best expressed in a saying I first found quoted in the Sefer HaTanya, the great work authored by the early Chasidic master and founder of the Chabad dynasty, Rav Schneur  Zalman of Liadi. He does not tell us the original source of the saying, but it is to be found in earlier sources as well.

This is the saying: “A little bit of light can dispel much of the darkness.” Despite its brevity and deceptive simplicity, it is a very profound saying that deserves careful study and contemplation.

Note, for starters, that it speaks of “a little light.” One need not be discouraged when battling darkness, be it physical or spiritual darkness. Even a little light is immediately effective. This gives hope to all of us, even to the least of us. Hopefulness and a positive attitude are conveyed in this simple saying in a manner more powerful than any other saying I know.

Note too that the saying is not naïve or unrealistic. The little light will not dispel all of the darkness. It will dispel much of it but not all of it. It will dispel it for a moment, hopefully for a long time, but not forever. There will always be a need for another light and for other kinds of light. But the way to combat darkness is not by complaining about it, by bemoaning it, or even by fighting it. It is by simply kindling a candle, by creating light.

Humanity has known many periods of darkness, as each of us has known in our individuals lives. Currently, there remains much darkness throughout the world: wars and threats of war, unprecedented natural disasters, ranging from hurricanes and floods to volcanic eruptions and devastating wildfires; violence and bigotry. Because of the nature of electronic communication, we are instantly and acutely aware of individual and communal suffering.

Here is what my revered and distinguished colleague and mentor, Rabbi Adin Steinsaltz, wrote in his recent Chanukah message: “Times like ours create at least the possibility for finding new paradigms for society. The easy way out—which the powerful elements of our time uphold and preach—is to keep the old order as it was and make some minor corrections as the need arises… Such changes and amendments may keep things in place for a while, but what we have here is an all-embracing earthquake.”

Meditation
Do his words not reflect the central message of our saying? He recognizes the light of possible “new paradigms” and even detects them within the “powerful elements of our time.” He speaks of the necessity to be satisfied with “minor corrections.” He does not delude himself by believing in permanent or total solutions. He realistically, but not quite pessimistically, acknowledges that our contemporary darkness is nothing less than an “all-embracing darkness.”

In a prior column, I told the story of the rabbi who led a small group of us teenagers in a monthly meeting. He introduced us to what would nowadays be called “spiritual meditation.” He was then a young man, and my friends and I were even younger. He went on to became quite famous and has since passed away.

In our pre-Chanukah meeting, he asked us to sit silently in front of the Chanukah candles each and every one of the eight nights. We were to meditate for 30 minutes while gazing at the candles. For the first 10 minutes, we were to just gaze at them. Afterwards, we were to allow a phrase or verse from our sacred tradition to come to mind and to reflect upon the phrase or verse while still silent. We then gathered at his home soon after Chanukah and reported on our experience to the group. I still vividly recall the entire process.

I must confess that I have not often practiced this exercise over the very many years since I was a teenager. But I have done so occasionally and more so in recent years. I am confident that you can now predict which verse comes to my mind when I gaze silently at those candles: “Me’at ohr—a little bit of light—docheh harbeh min hachoshech—dispels much of the darkness.”

I intend to practice this meditative exercise this year. I invite you to do so as well.

Rabbi Tzvi Hersh Weinreb is the executive vice president emeritus of the Orthodox Union. His newly released Person in the Parasha: Discovering the Human Element In the Weekly Torah Portion, co-published by OU Press and Maggid Books, contains a compilation of his weekly Person in the Parsha column. Information about his book is at https://www.ou.org/oupress/product/the-person-in-the-parasha/. For other articles and essays by Rabbi Weinreb, http://www.ou.org/torah/parsha-series/rabbi-weinreb-on-parsha.