Just what does she believe in?  Fickle Gillibrand flip-flops on various issues

DC Report
By Douglas Bloomfield
Watching the junior senator from New York go from being a conservative Blue Dog Democrat in the House to outspoken progressive senator and now presidential candidate reminds me of Groucho Marx’s statement, “Those are my principles, and if you don’t like them, well I have others.”

Evolution Or Opportunism?
When she was appointed to the Senate in 2009 to succeed Sen. Hillary Clinton (D-NY), who became secretary of state, Kirsten Gillibrand declared, “I will stand up for what I believe in.”  Her first move was a 180-degree turn on gun control. She went from an A grade with the NRA to an F as she moved across Capitol Hill to the Senate and began focusing on going another mile up Pennsylvania Avenue.

Barely two months after she assured New Yorkers she intended to serve her full six-year Senate term if they re-elected her, she went on Stephen Colbert’s Late Show to announce her candidacy for president.

Change seemed to come rapidly. Was it just growth as she shifted focus from the rural upstate district to statewide office? Was she catching up with the Democratic party as it became more progressive? 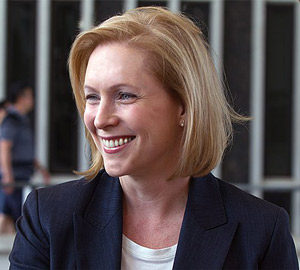 The problem with flip-flopping is knowing whether shifting views are a sign of evolution or opportunism. The difference is longevity. Voters want to know whether the change is real or likely to shift with the political winds.

Gillibrand’s positions have moved left not only on guns but also on immigration, sanctuary cities, amnesty for illegal immigrants, same-sex marriage, gays in the military and the financial industry, just for starters.

Endorsing her re-election, the New York Times called her “one of the Senate’s leading liberal voices.”

Gillibrand defends her policy shifts as courageous, not opportunistic. “I think it’s important to know when you’re wrong and to do what’s right,” she said.

Loyalty Questions
Her initial views on immigration were not that different from President Trump’s —minus his wall—but looking back, she told Rachel Maddow on MSNBC, “I was callous to the suffering” of immigrant families.

Nearly 20 years after President Bill Clinton’s impeachment for lying about sex with an intern, Gillibrand said the president should have resigned over the incident. Many saw that as an opportunistic bid to polish credentials for her claim to leadership of the #MeToo movement despite what the Clintons have done to help her. The former president had campaigned for her and the couple had given her political and financial support in her runs for office.

This could come back to haunt her presidential campaign when she looks to Hillary loyalists for support in a crowded field that includes several strong women candidates.

After initially sponsoring the legislation she withdrew after being convinced “it chills free speech.”  She insisted “I vehemently oppose the BDS movement,” but not this bill.  AIPAC charged that Gillibrand and other opponents of the bill “no longer supports the fight to combat the international delegitimization of Israel.”

In an initial vote Monday it passed 74-19.  Among the no votes were two other Democratic presidential hopefuls, Elizabeth Warren (Mass.) and Bernie Sanders (Vt.), and a third, Kamala Harris (Calif.), was absent.

The non-partisan Politifact said an AIPAC memo to members falsely stated that “Nothing in this bill restricts constitutionally-protected free speech or limits in any way criticism of Israel or its policies.”

Schumer and Sen. Ben Cardin (D-Md.), the ranking member of the foreign relations committee, were sponsors of the bill.

Jewish Democratic Council of America supported the bill, as did the ADL. Interestingly, an internal ADL staff memo recommended opposition. The legislation “is ultimately harmful to the Jewish community” and the laws would be “ineffective, unworkable, unconstitutional and bad for the Jewish community,” the memo said.

“We Love Israel More” Campaign
Gillibrand insists she is opposed to BDS, but wants to see better protection for First Amendment rights. Her reversal could open her to attacks by some of those same groups, particularly AIPAC, questioning her support for Israel, but it could win favor among liberal Jews. The test will be her consistency.

No Republicans opposed the bill, which they’d sought to force Democrats to cast what they would then call an anti-Israel vote.  The legislation also included Israel’s multi-billion-dollar aid package.

Look for Republicans to use the vote as another wedge in their “we love Israel more” campaign and to paint Democrats as anti-Israel.

The alt-right Breitbart News, the ZOA and other right-wing extremists may denounce Gillibrand, Warren, Sanders and other critics of anti-BDS legislation, but those activists are solidly in Trump’s camp and wouldn’t support a Democrat in any event.  AIPAC, happy with Trump’s positions on Jerusalem, the American embassy in Israel, closing the Washington office of the PLO and generally supporting the Netanyahu government, may mobilize its minions, especially its donor base, against Gillibrand and other critics of its anti-BDS bill.

Dems Remember Franken
She created considerable resentment among some Democratic colleagues and members of the Jewish community for her quick demands for Sen. Al Franken (D-Minn.) to resign, forcing him to leave office before the ethics committee could look into the allegations of sexual misconduct.

In a bid to raise her #MeToo profile at any price she didn’t wait for facts, looking more like an opportunist than a “zero tolerance” crusader.  The Washington Post reported the episode “angered some on the left who felt that Gillibrand abandoned Franken for her own gain.”

Her haste in pouncing on the Franken charges sounds consistent with what people following her told the Washington Post.  Gillibrand, they said, “has a hair-trigger judgment and an overriding instinct to capitalize on the political movement.”

Gillibrand’s hasty attack on Franken was wrong.  Flip-flopping is also unless it leads to sincere and consistent change.

We already have a president who reacts before thinking about the ramifications. We don’t need another.