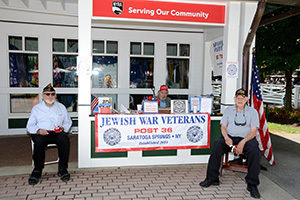 NYRA: What is the mission of the Jewish War Veterans Post 36?

DK: We believe that we need to do all we can to help our fellow veterans. We run an annual clothing drive for homeless veterans and we make contributions of furniture and other items, because veterans work very hard for us because they are our brothers in religion and in nationalism. We work to help veterans in our community. Saratoga has two veteran’s houses in Ballston Spa, and they do a great job and we support them 100%. So, we [just] try very hard to spread the word about veterans in our community, but particularly about Jewish veterans, and there are a lot of them.

NYRA: What branch of the military did you serve in?

DK: I served in the Air Force during the time of Vietnam. I didn’t go to Vietnam, but I am very proud that I was able to serve my country when the time came.

NYRA: What’s one thing people should know about your organization?

DK: We have only been in existence for about 3 years. We concentrate on our clothing drive which runs from September to January, because that’s when people need the warm clothing, sweaters and hats. In 2016 we delivered 65 coats and sweaters to men and about 45 to women, and we also include gloves and other things homeless veterans need to keep warm in the winter.