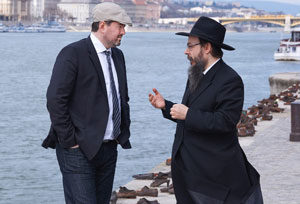 At a Holocaust memorial on the bank of the Danube River in Budapest, Csanad Szegedi has a discussion with a rabbi.

What happens when a life and political belief in anti-Semitism is turned on its head when someone learns of a secret, Jewish past? The Saratoga Jewish Community Arts presents the biographical documentary, “Keep Quiet” on Sunday, Oct. 15, at 7 p.m. at Temple Sinai, 509 Broadway, Saratoga Springs. The film will also be shown as part of the Schenectady Jewish Film Festival on Saturday, Oct. 28, at 7:15 p.m. and on Sunday, Oct. 29, at 2 p.m.at the Schenectady Jewish Community Center, 2565 Balltown Rd., Schenectady.

“Keep Quiet” (2016, 97 minutes, Hungarian with English subtitles) is a documentary about Csanad Szegedi, who experienced a meteoric rise, first as one of the founders of Jobbik (Hungary’s extreme right-wing party), then as founder of the Magyar Gárda (Hungarian Guard), a now-banned paramilitary wing of Jobbik, to national vice chairman of the party at age 26. When the 2009 national election results showed that the party received an unexpected 14% of the vote, Szegedi with his anti-Semitic views, was elected to the European Parliament.

Then Szegedi learned an inconvenient truth. The revelation changed the life of the then 34 year old. One of his right-wing comrades confronted him with proof of Szegedi’s Jewish ancestry. Szegedi’s maternal grandparents were Jewish and his grandmother, a survivor of Auschwitz who, fearing further persecution, had hidden her background. Szegedi was devastated by the revelation. He reached out to Rabbi Baruch Oberlander, head of the Orthodox community in Budapest.

Is Szegedi’s transformation to Jew sincere?

“It’s a little disturbing to listen to the language of the extreme right in Hungary,” says Saratoga Jewish Community Arts Coordinator, Phyllis Wang, which uses such language as, “Protect Hungarian lands! Restore law and order! Multinationals must pay taxes! To jail with the culprits! Because Hungary belongs to the Hungarians! We are hearing this language all too frequently in our own land.”

The Saratoga Jewish Community Arts screening on the 15th will be followed by a dessert reception and panel discussion. A $5 donation/admission is requested. Information and reservations for the Saratoga showing may be obtained by calling 518-584 8730, ext. 2, or at www.saratogajewishculturalfestival.org.

Following the evening film presentation in Schenectady on Saturday, Oct. 28, a group discussion will be led by Saratoga County District Attorney and community activist James Murphy. Admission for the Schenectady Jewish Film Festival showing is $5 for Center members and $10 for others. Admission is free for students with a school ID. Judy Ben-Ami at 518-377-8803 can provide details.