Keeping Israel safe: The most significant defense developments of the decade 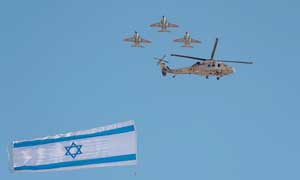 An Israel Air Force graduation ceremony at the Hatzerim Air Base in the Negev desert, June 27, 2019. Photo courtesy of Mila Aviv/Flash90.

Israel Hayom (via JNS) – Much has been said about the complex defense and security challenges Israel faces as a Jewish state in the Middle East. Being the sole democracy in one of the toughest neighborhoods on the planet means that Israel must employ various means to achieve and sustain its national security goals, as well as create and maintain deterrence vis-à-vis its enemies, both near and far.

The past decade has seen Israel deal with more than a few tactical and strategic developments, including the introduction of the cyber sphere as a major theater of battle alongside land, sea, air and space; the rise of subterranean warfare and the evolution of the Iranian threat, to name a few. Looking back at this period, there have been many incidents and occurrences that could easily make any nation’s list of “greatest defense hits.” Here is a countdown of some of the most significant events of the decade in the realm of Israeli national security.

5. Southern exposure: The Israel-Gaza wars
Over the past decade, Israel’s border with the Hamas-ruled Gaza Strip has emerged as a tinderbox that threatens to ignite at any given moment. Numerous flare-ups between the Jewish state and the Islamist terrorist group have taken place over the past 10 years, each growing progressively worse in intensity.

Two of these flare-ups spiraled into full-fledged military conflicts: “Operation Pillar of Defense” in 2012 and “Operation Protective Edge” in 2014. Each saw the Israeli home front sustain massive rocket fire, while the Gaza Strip was left in ruins.

“Operation Pillar of Defense” was an eight-day military campaign launched on Nov. 14, 2012, in the wake of the targeted assassination of Hamas military chief Ahmed Jabari via an Israeli airstrike.

Hamas retaliated by firing over 100 rockets at Israel in the following 24 hours and staging two separate terrorist attacks against Israeli troops deployed in the Gaza sector, prompting the Israeli government to order a full-scale counter-terrorism operation in the coastal enclave.

According to Israel Defense Forces data, Gaza terrorists fired some 1,500 rockets at south and central Israel during the operation. Four Israeli civilians and two soldiers were killed in Palestinian rocket attacks and some 250 Israelis, including 10 soldiers, were injured.

According to the United Nations Human Rights Council, 174 Palestinians, 107 of them civilians, were killed in the fighting and about 1,000 were injured.

Israel found itself in a similar situation only two years later. In June 2014, Hamas operatives abducted and murdered three Israeli teenagers. This gruesome attack prompted the IDF to launch “Operation Brother’s Keeper” across Judea and Samaria, in which dozens of Hamas operatives were arrested.

The campaign included massive airstrikes as well as a ground incursion, which included several fierce battles. A total of 67 Israeli soldiers were killed, and Hamas was able to abduct the bodies of two soldiers, Golani Brigade Staff Sgt. Oron Shaul and Givati Brigade Lt. Hadar Goldin. It is still holding their remains. Another 469 soldiers were injured. Four Israeli civilians and one Thai national were killed by terrorist rocket fire, and hundreds of Israelis were wounded.

The fighting left 761 Palestinian terrorists and 936 civilians dead and wrought havoc on the coastal enclave from which it has still not recovered.

Both operations ended with ceasefires brokered predominately by Egypt, which is also involved in the current efforts to stave off another conflict between the Jewish state and Gaza’s rulers. Israel has made it clear it has no interest such an escalation, but, as stated by top political and military officials, will not hesitate it if is deemed necessary to maintain national security and the safety of the Israeli public.

4. Stealth mode: The IAF receives F-35 fighter jets
In December 2017, the Israel Air Force became the first air force in the world outside the United States to have an operational F-35 squadron. The first F-35 fighter jet arrived in Israel a year earlier and was dubbed “Adir”—Hebrew for “Great.”

Lockheed Martin’s F-35 Lightning II is the most advanced fighter jet in the world. The fifth-generation fighter combines advanced stealth, integrated avionics and superior logistics support with the most powerful and comprehensive integrated sensor package of any fighter aircraft in history, thus allowing pilots to penetrate enemy airspace without being detected.

According to Lockheed Martin, production costs for the F-35  run between $94 million and $122 million per jet. Israel has inked a deal to procure 50 jets overall, for an estimated $7.5 billion.

Israel put the F-35 to its first test in mid-May 2018, during clashes with Iran in Syria, giving new meaning to the phrase “the IDF’s long arm.”

The jet’s superior capabilities have been a game-changer for the Israeli military as a whole. In 2017, then-IAF chief Maj. Gen. Amir Eshel stated that Israel gathered intelligence during a single F-35 flight that other reconnaissance and intelligence gathering systems would take weeks to collect.

The IDF noted that “the capabilities of the Adir Squadron ensure the IAF’s superiority in all its missions, namely the protection and safety of Israel’s skies.”

The U.S.-Israel Security Assistance Authorization Act sought to allow Israel—the United States’ chief strategic partner in the Middle East—to upgrade most of its fighter aircraft, among other things by acquiring F-35 fighters, improve its ground forces’ mobility and strengthen its missile defense systems, all with the aim of maintaining Israel’s qualitative edge in one of the most volatile regions in the world.

“Prime Minister [Benjamin] Netanyahu and I are confident that the new MOU will make a significant contribution to Israel’s security in what remains a dangerous neighborhood,” then-U.S. President Barack Obama said.

American military aid is the cornerstone of Israeli defense policy. Not just because of the actual funding, which represents a significant portion of the IDF’s budget—in 2019, Israel’s defense budgets came to NIS 55.2 billion ($15.8 billion) or 11.5 percent of the overall NIS 497.6 billion ($142.8 billion) state budget—but mainly because of the close-knit relationship with the world’s foremost superpower, which allows Israel to lean on its capabilities.

2. Out in the open: The Iran-Israel proxy conflict
It will come as little surprise to anyone that Israel and Iran consider themselves arch enemies, but what has been—according to foreign media reports—a low-intensity conflict waged out of the public eye for years has recently emerged as overt hostilities lurking just beyond Israel’s northern borders.

The Islamic Republic has repeatedly stated that is seeks to “wipe Israel off the map,” and has often used its chief proxy in the Middle East, the Lebanon-based Hezbollah, to launch attacks against Israel from the north, all while sponsoring the Gaza-based Hamas and Palestinian Islamic Jihad, as well.

In 2011, Iran began intensifying its presence in the region under the pretense of assisting its ally, Syrian President Bashar Assad, fight the insurgency that erupted in Syria at the height of the “Arab Spring.”

The brutal Syrian civil war, which only began to wane in 2019, proved the perfect pretext for Iran to send troops and advanced weapons to Syria in a growing effort to entrench itself militarily mere miles from Israel’s northern border.

Israel, for its part, has spared no effort to disrupt the force build-up of the Iranian-Shi’ite axis throughout the Middle East, which poses a strategic threat to Israel: In a rare admission, a senior Israeli defense official said in 2018 that the IDF has carried out more than 200 ‎strikes against Iranian targets in Syria.

According to foreign media reports, Israel has also conducted cyber warfare against Iran and has publicly advocated for international military action against Iran.

Israeli defense officials have warned that as Tehran grows more brazen in its anti-Western rhetoric and actions, it is highly likely that it will try to provoke another war between Hezbollah and Israel.

1. Game changer: Iron Dome becomes operational
One of the most important developments in Israel’s air defense capabilities came on the scene in 2011, when the now-world-renowned Iron Dome defense system became operational, proving to be a game-changer in terms of home-front defense.

Developed by Rafael Advanced Defense Systems and Israel Aerospace Industries, Iron Dome, declared operational on March 27, 2011, is designed to intercept and destroy short-range rockets and artillery shells fired from distances of between 4-70 km (2.5-43 miles) and according to IDF data it has a 90 percent interception success rate.

Iron Dome’s performance is so impressive that, in addition to its land-based deployment, the military plans to deploy it at sea in the future, to protect Israel’s offshore gas platforms in conjunction with Israel’s Barak 8 missile system.

Iron Dome has proved essential in protecting the Israeli home front from the ever-increasing terrorist rocket fire emanating from the Gaza Strip: During 2012’s “Operation Pillar of Defense,” Iron Dome intercepted 428 projectiles, and during 2014’s “Operation Protective Edge” it downed 735. Since then, and through the various flare-ups noted between Israel and Hamas, the system has intercepted thousands of rockets.

The military credits “breakthrough technology” for the fact Iron Dome confronts multiple threats simultaneously, in all weather conditions. These features have made it highly attractive to other nations facing various airborne threats.

So far, Iron Dome has been acquired by the militaries of Azerbaijan, India and Romania. According to the defense establishment, the defense ministries of several NATO member states have also expressed interest in acquiring the system.

Iron Dome batteries are deployed nationwide, providing the first line of aerial defense for the home front. Its steady success rate has had a strategic impact on how the military conducts its operations, while also providing a much-needed sense of security for the Israeli public, earning it

Before the ‘Final Solution’ There Was a ‘Test Killing’
Hila Schlakman finishes daily Talmud learning cycle, may be youngest woman to do so