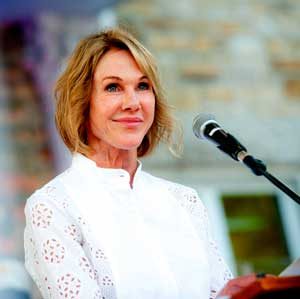 By JACKSON RICHMAN
(JNS) – U.S. Ambassador to Canada Kelly Craft was confirmed on Wednesday, July 31, by the U.S. Senate as the next U.S. ambassador to the United Nations. The final tally was 56-34.

Craft, 57, will replace Nikki Haley, who was highly acclaimed by many, especially those in the pro-Israel community.

To Fight Anti-Israel Bias
At her confirmation hearing, Craft, who had served as an alternate delegate to the United Nations under U.S. President George W. Bush, vowed to fight the international body’s anti-Israel bias, in addition to calling out anti-Semitism.

“Without U.S. leadership, our partners and allies would be vulnerable to bad actors at the U.N. This is particularly true in the case of Israel, which is the subject of unrelenting bias and hostility in U.N. venues,” she said in her opening testimony to the Senate Foreign Relations Committee. “The United States will never accept such bias. If confirmed, I commit to seizing every opportunity to shine a light on this conduct, call it what it is, and demand that these outrageous practices finally come to an end.”

Craft also said that “it is not acceptable” for the Security Council to be biased against Israel.

She added that “there will be no stronger friend of Israel.” Additionally, Craft said that “there’s no place” for the United Nations to establish a blacklist of businesses that work with or are in Israel, an effort by some to further the anti-Israel BDS movement.

“We need to promote Israel,” she said.

The U.N. ambassadorship is expected to be downgraded from a Cabinet-level position.

Friend To Israel
The Kentucky native and her husband, Joe, who is a coal magnate, are major Republican donors, and are close to fellow Kentuckian and U.S. Senate Majority Leader Mitch McConnell.

The American Israel Public Affairs Committee applauded the confirmation. “We congratulate Ms. Craft and look forward to working with her as UN ambassador in strengthening the U.S.-Israel relationship and in standing with our democratic ally in this critical international forum,” AIPAC spokesperson Marshall Wittmann told JNS.

“Kelly Craft is a great friend of the Jewish state who understands the truth of the Arab/Islamic war against Israel,” Zionist Organization of America president Mort Klein told JNS. “I believe she will happily and professionally support President Trump’s historic and ongoing pro-Israel policies.”

Shimon Koffler Fogel, CEO of the Centre for Israel and Jewish Affairs, told JNS that he got to know and work with her when she was the U.S. ambassador to Canada and has a close relationship with her Israeli counterpart, Nimrod Barkan.

“She is far more talented than I think some give her credit for. She’s polished, she’s aware of issues in a very sophisticated way. She’s a patriot,” he said. “She is just extraordinary in her expression of support for administration and defense of shared vision and mission in terms of the values that the U.S. and Israel share.”

Britt Brockman, a leader in the Louisville Jewish community, knows Craft and her husband personally, and has served with her on the University of Kentucky’s board of trustees. He told JNS in April that Craft was once with the American Israel Public Affairs Committee on a trip to Israel and has previously met Israeli Prime Minister Benjamin Netanyahu.

No Surprises Expected
At Turtle Bay, while Craft would continue to echo the Trump administration’s stances at the UN, her style, according to Brockman, would be quite different than that of her outspoken predecessor, Nikki Haley. (Brockman offered nothing but praise for Haley’s tenure, which was highly regarded by Israel.)

“I do not think that Ambassador Craft takes any job lightly, and that she’s going to give it her all,” he added. “She’s going to use much information. This has been her habit in every way I’ve ever known her, but she is going to be well-prepared, and if there are topics about which she needs to be better prepared, she’ll surround herself with those who can help her.”

In terms of style, Brockman said Craft “will bring her own personality,” which he specified as “subdued” but “very well-received by leaders.” Brockman added, “I think she will espouse the viewpoints of the president and vice president as relative to their views on Israel.” In other words, he said, “I think there will be no surprises.”