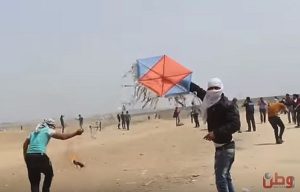 Jewish Federations of North America – Kite Attacks The phenomenon of “kite arson” from Gaza has emerged as an increasingly serious threat in Israel’s south. The new Palestinian tactic emerged just over two months ago, and has already caused significant damage, even as responses to the problem are evolving. The low-tech, low-risk attacks are launched by Palestinians deep in the Gaza Strip, and can cause significant damage and danger in Israel. Typically, a kite or set of helium-filled balloons are launched, using only the wind. The attackers tie small incendiary devices to the kites, often just a rag soaked in gasoline, which are lit before launching. Once high in the air, the string is cut and the kite or balloons fly independently.

The westerly winds blowing in from the sea can propel them across the border to Israeli fields where they often ignite large fires in the very dry summer conditions. Hamas and other activists are behind many of the attacks (see video footage here). More than a thousand of these balloons and kites have been sent over the border since March 30, 2018. Around two-thirds of the devices have been intercepted and extinguished by the IDF, but hundreds have also landed in Israeli territory, sparking some 550 fires. See video footage here and here. The kite attacks come against a backdrop of two months of violent protests at the Gaza border that have seen just over 100 Palestinians killed. The vast majority of the fatalities were members of either Hamas or Islamic Jihad. The Fires and the Damage Caused As a result of the fires, more than 7,500 acres of agricultural land and natural habitat on the Israeli side of the Gaza border have been burned (which is roughly equivalent to the damage caused by the Carmel Forest fires of 2010).

The blazes have also devastated local wildlife, and officials have found thousands of carcasses of animals such as jackals, foxes, snakes and turtles. Some 50,000 people live in the area known as the “Gaza Envelope,” – the 37 mile-long border between Israel and the Gaza Strip, where agriculture is the predominant business. See drone footage of the fires’ damage here. While no people have been injured and no buildings have been burned yet, it is estimated that direct damage totaling $2 million has been caused so far. Sixty-five compensation claims have been made by farmers to the government for damages caused to their land by the fires.

The Israeli Cabinet has said the government would withhold funds that it regularly pays to the Palestinian Authority from taxes that are collected to cover the costs of this damage. Long term effects from smoke inhalation to the local population may also prove to be significant. Health care officials in the region are already reporting an uptick in asthma attacks.

According to a Kibbutz Nahal Oz spokesperson – and veteran resident of over 40 years – Danny Rahamim, farmers in the area are having difficulty dealing with the arson and how it threatens the kibbutz’s only source of income – agriculture. The kibbutz workers spent months cultivating the fields, and then everything was destroyed in a matter of seconds. The kibbutz has lost about 320 acres of cultivated wheat and expensive irrigation equipment. “It is hard to describe how painful this is,” Rahamim stated. “But we will not budge from here. We will continue to work the land down to the last meter. But we are also optimistic that it is possible to achieve peace and stability.” Response The Israel Fire and Rescue Service has deployed an additional 10 fire trucks and 30 firefighters to the region. According to the commander of the IDF’s Technology Unit, Col. Nadav Livne, the army has adapted drones to “hunt” kites without causing fires. Usually, the high-speed drones simply ram the kites, bringing them down in a controlled location. More than 400 kites have already been intercepted by the newly adapted, high-durability IDF drones, which reach speeds of 100 miles per hour.

Reservists who specialize in flying drones have been mobilized and have had significant success in reducing the number of fires over the past weeks. Once a kite is spotted, the drones can intercept within 40 seconds, and they have a 90% success rate in preventing fires. See footage of the drones in action here. Israel’s Rafael Advanced Defense Systems has also developed the Sky Spotter system, which has now been deployed in the area. Originally developed to counter small drones, Sky Spotter can track arson balloons or kites and pinpoint their location, where they are heading, and where they are likely to land. The operators then notify firefighters, who can then try to reach the landing points to put out the flames before they spread. Because those who launch these attacks tend to be young children or teenagers, the IDF has so far not targeted the launchers. Nonetheless, on Tuesday night (June 26), the IDF said that it used a tank and an aircraft “to strike a car owned by a Hamas militant active in a unit that sent terror balloons into Israel and two Hamas observation points north of the Gaza Strip.”

The car was reportedly empty at the time. Israeli mental health professionals have also begun to take note of the significant effects that the fires are having on residents, particularly those who have seen their fields go up in smoke. In a number of cases fires came to within a few hundred yards of residents’ homes. In one therapeutic response, officials in Sderot invited parents and children to create and launch colorful handmade kites bearing positive messages. The kite-making workshop was open to families from the surrounding towns and culminated in hundreds of colorful kites being launched, each bearing positive messages of love and peace.

According to Federation partner ITC (the Israel Trauma Coalition), professional trauma teams are working around the clock making home visits and assessing needs. However, there are concerns for these caregivers who are showing signs of extreme fatigue. Since the start of the fires, ITC has treated 618 people in the region, including 422 children. MY5! is a joint initiative of Federation partners The Jewish Agency and the American Jewish Joint Distribution Committee- JDC. The program works with organizations, grassroots activists, volunteers, community leaders and municipality and regional councils in specified locations in southern Israel, to help each build a support network. In recent weeks, the project has brought together spokespeople from across the south to ensure that the voices of local residents affected by the fires are heard internationally.

In a separate effort, the Jewish National Fund (KKL-JNF) began distributing thousands of tree seedlings to residents of Gaza border communities as part of a planting campaign in the area. While the Government of Israel has pledged reparations for farmers who have lost crops, local representatives pushed hard for additional payments for those forced to harvest early, losing part of the value of their produce, as well as for those who have lost agricultural equipment. Israel’s Ministry of Agriculture is offering to compensate farmers for these losses. As a result of the security situation in the area, local tourism has taken a significant hit. Israel’s Ministry of Finance has announced that owners of guest-houses and hotels in the region would be entitled to collect compensation for indirect damage due to tourist cancellations.

JFNA in Israel will continue to monitor the situation carefully and report as needed.