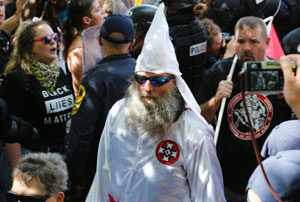 The fliers contain a phone number linked to a recording that attempts to recruit members.

ABC-First Coast News reported that the content of the fliers, which have been dropped in recent weeks, has increased in vitriol, including specific threats.

One flier reads: “He who fights the Jew fights the Devil,” citing the Nazi children’s book publisher Julius Streicher, and shows a good Jew as one with a bullet in his forehead. Another says “Smash Jew Communism.”

The racist fliers threaten African-Americans who are caught “making eyes” at white women.

The Jacksonville Sheriff’s Office told the local media it is investigating the fliers.