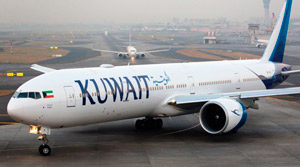 (JNS) – Kuwait Airways has agreed to pay substantial damages, plus costs, to an Israeli who was refused a ticket on a Kuwait Airways flight from London to Bangkok on the grounds of her nationality.

Mandy Blumenthal, with the help of UK Lawyers for Israel, issued a claim against Kuwait Airways, citing damages for racial discrimination and harassment after she tried to buy a return ticket to Bangkok at Heathrow Airport from the Kuwait Airways desk in November.

The airlines has agreed to pay Blumenthal damages, though the company has not admitted liability.

“It is horrible to be singled out, to be told you are not allowed to do something because of who you are,” said Blumenthal. “Having someone telling me that he is following instructions, that it is a rule, a policy, gave me a sinking feeling inside. In my mind, it is an anti-Semitic policy to single out the only Jewish state to boycott.”

David Berens of UK Lawyers for Israel said this is a clear-cut case, and that direct discrimination on the grounds of nationality is illegal.

“Ms. Blumenthal has done a service in showing up Kuwait Airways’ illegal policy. Kuwait Airways is now legally obliged to end this policy or end its services from the U.K. altogether,” he said.

Kuwait Airways has been under intense legal and public pressure over its practice of barring Israelis for some time now.

Last year, the German government launched an investigation into whether Kuwait Airways has violated air-traffic laws by refusing service to Israelis. The airline also faced legal trouble in Frankfurt, Germany, for barring an Israeli passenger from flying to Thailand. However, that case was rejected by a Frankfurt court.

In 2016, Kuwait Airways halted its inter-European flights, as well as its route between New York City and London, rather than allowing Israeli citizens to fly on its airline after facing legal threats in the United States and Switzerland.