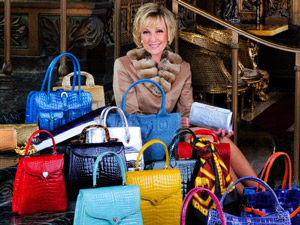 Trump’s pick for the next US ambassador to South Africa.

NEW YORK CITY (JTA) – Lana Marks, whose designer handbags have been carried by such celebrities as Jennifer Aniston and Helen Mirren, has been nominated to serve as ambassador to her native South Africa.

Marks, who lives in Palm Beach, Fla, is a member of Donald Trump’s Mar-a-Lago Club resort. Her nomination by Trump was recently announced and sent the following day to the Senate.

Marks, who is Jewish, has no diplomatic experience. She speaks the native South African languages Xhosa and Afrikaans and attended the University of the Witwatersrand and the Institute of Personnel Management in Johannesburg.

The South African government has been critical of Israel, with prominent South African leaders and organizations, including the ruling African National Congress, accusing Israel of practicing apartheid in its treatment of the Palestinians.

The last ambassador to South Africa, Patrick Gaspard, a Democratic appointee, left his post in December 2016. The U.S. mission has been overseen since then by Chargé d’Affaires Jessye Lapenn.

Along with Aniston and Mirren, other celebrities who carry her handbags include Charlize Theron, Kate Winslet, Angelina Jolie, Drew Barrymore and Paris Hilton.

Marks went into the handbag business after she could not find a red alligator handbag to match the outfit she wore to a birthday celebration for Queen Elizabeth II aboard the royal yacht Britannia, BuzzFeed has reported. The experience demonstrated to her that there was a niche for luxury, exotic leather fashion handbags in bright colors.

Quakers of Britain to boycott companies that do business in the West Bank
Trump cites Israel in statement reaffirming U.S. ties with Saudi Arabia despite journalist’s killing