Language As an Anti-Israel Tool 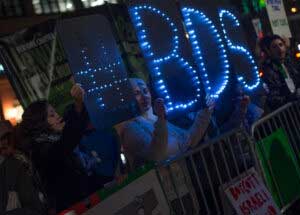 EXECUTIVE SUMMARY: Israel has largely ignored the war of words against it. This includes malicious terms such as “apartheid” and “occupation,” as well as anti-Israel phrases like “land for peace” and “two-state solution.” The UN’s falsely calling descendants of Palestinians who fled during the 1948 war “refugees” is another example. Well before any new negotiations take place with the Palestinians, the issue of Palestinian incitement as part of their cult of the glorification of genocide and death should be put on the international agenda.

Successive Israeli governments have never had comprehensive policies to systematically fight all fronts of attack against the country. Prime ministers and their ministerial colleagues never seemed to understand what any beginning strategist would comprehend: that the fight against the Israeli state involves many weapons and tools, and Israel must combat them all.

No one can ignore open warfare and terrorism. The Israeli government thus gave those aspects of the battlefield much attention. The bodies created for this purpose at the IDF and the intelligence agencies perform rather well. A few years ago, the Israeli government grasped that cyberwarfare was dangerous as well, and accordingly set up an agency to deal with it.

In other areas of the battlefield, Israel has performed less effectively and often negligently. In confronting boycotts, Israel’s performance was unremarkable. The original Arab boycott existed for decades. Israel tried to circumvent it in many ways—some successful, many others less so.

At the beginning of the 21st century, another form of boycott emerged that is now known as BDS (Boycott, Divestment, Sanctions). BDS started in the university world with an open letter in the Guardian on April 6, 2002, signed by more than 100 academics. It called for a moratorium on all cultural and research links with Israel at European or national levels until the Israeli government abided by UN resolutions and opened “serious peace negotiations with the Palestinians, along the lines proposed in many peace plans including most recently that sponsored by the Saudis and the Arab League.” The open letter was followed by other somewhat similar initiatives. Friends of Israel came out against it. The Israeli government took very little action for many years.

Israel has largely ignored the massive war of words against it. Some nations are masters of verbal combat, with Nazi Germany at the top. The Nazis invented an almost entirely new language to describe its own criminal actions. Many synonyms for murder were created.

The Soviet Union was a competent second. Before it started to promote the term “anti-Zionism,” the term did not exist in dictionaries. Millennia earlier—in the first book of the Bible—the language issue was already present in a dramatic way. God destroyed the common language of those building the Tower of Babel. Thus, major confusion in communication was created.

George Orwell understood the role language plays very well. In his book 1984, published in 1949, he invented Newspeak, which was characterized by the interchangeability of the meanings of words. This replaced traditional English. Frequently quoted are the expressions: “freedom is slavery, ignorance is strength” and, very relevant to the Palestinians, “war is peace.”

The Israeli left and even a number of mainstream Israelis have often promoted the fundamentally mistaken notion of “land for peace.” It radically misjudged how much the Palestinians have to gain from peace. This has now partly been replaced by “peace for peace.”

The Israeli government may react from time to time—but far from always—if somebody prominent accuses Israel of ”apartheid.” Former German socialist foreign minister Sigmar Gabriel, for instance, used that term and later apologized for it.

One of the most frequent distortions used against Israel is that it is an ”occupier” of the West Bank. Yet Israel is at most an occupier of part of the Golan Heights, which formerly belonged to the Syrian state. The West Bank was in the hands of Jordan. Its sovereignty there was only recognized by the UK and Pakistan. There never was a Palestinian state, so it cannot be occupied. Dore Gold explained in detail that the status of the West Bank is “disputed territory.” He made this statement shortly after he became president of the Jerusalem Center for Public Affairs in 2000.

A ”two-state solution” is another deeply embedded term. It is difficult to deal with because US president Barack Obama exerted much pressure on PM Benjamin Netanyahu to accept the concept. Netanyahu did so in his 2009 Bar Ilan speech, when he said: “If we receive this guarantee regarding demilitarization and Israel’s security needs, and if the Palestinians recognize Israel as the State of the Jewish people, then we will be ready in a future peace agreement to reach a solution where a demilitarized Palestinian state exists alongside the Jewish state.” A Palestinian state had already been accepted earlier by Israeli PMs Ehud Barak and Ehud Olmert in their peace proposals to the Palestinians.

In this context Israeli officials hardly ever mention that there are already two states on the former land of mandatory Palestine: the Palestinian state of Jordan, which occupies 75% of that territory, and Israel. Another Palestinian state—assuming Hamas and Fatah can agree on it—in the West Bank and in Gaza would thus be a third state. Also, the Trump plan, which Israel has accepted, is based on a Palestinian state next to Israel.

Several authors have focused on the dangerous use of semantics against Jews and Israel. Much work on this has been done by French linguist Georges-Elia Sarfati, who undertook a detailed analysis of the phenomenon. Sarfati pointed out that discourse is formulated on the basis of the ideological position of those who engage in it. He said, “Rather than words being neutral, they serve to introduce a certain vision of the question they address.”

This expression ”two-state solution” is so deeply entrenched in the West that it will require an enormous effort to spread doubt about it. That is not because the message isn’t simple. Why would one upgrade the criminal Palestinian entity—the leaders of which glorify genocide and reward the murder of civilians, and which is permeated with a death cult—into a state?

Israel’s battle against the UN’s abuse of the phrase ”Palestinian refugees” has been fought only in a lukewarm way. There is a general definition of “refugee”: “someone who is unable or unwilling to return to their country of origin owing to a well-founded fear of being persecuted for reasons of race, religion, nationality, membership of a particular social group, or political opinion.”

Specifically for the Palestinians, the UN expanded this definition to include descendants of refugees. This has undermined the meaning of the word and multiplied resulting problems. Almost no Palestinian “refugees” are true refugees according to the original definition. They did not flee from Israel, though their surviving parents, grandparents, or great-grandparents may have done so and are genuine refugees. Yet not a single international journalist points this out or uses the expression “UN fake refugees” for them.

Another abuse of language is to call Israelis “colonists.” That word was exclusively used for people who went to lands usually thousands of kilometers from their homeland. The 1967 partition lines that separated Israel from the Palestinian territories were armistice lines, yet they are frequently and mistakenly called ”borders.”

There are also many examples of the abuse of language in the antisemitism discourse. The French government often used to speak about “tension between communities.” It suggested that two communities, the Muslim and the Jewish, were aggressive toward each other. The reality was one-sided aggression and hatred toward the Jewish community originating in parts of the Muslim community.

The Palestinians will probably wait to see if Biden is elected president of the US and whether he will tear up the Trump plan. Should this occur, it may well be that the Palestinians will then decide to try to arrange a peace conference to deal with concrete issues such as final borders, the status of the Temple Mount, the demilitarization of a Palestinian state, and so on. It is unlikely to address a crucial issue: how the Palestinians intend to rid themselves of the cult of genocide and death that permeates their society.

This issue should be prominently put on the international agenda by Israel. Otherwise, if a Palestinian state is established it will be the upgrading of a criminal entity into a criminal nation state.

Dr. Manfred Gerstenfeld is a Senior Research Associate at the BESA Center, a former chairman of the Steering Committee of the Jerusalem Center for Public Affairs, and author of The War of a Million Cuts. Among the honors he has received was the 2019 International Lion of Judah Award of the Canadian Institute for Jewish Research paying tribute to him as the leading international authority on contemporary antisemitism.

I blew the whistle on the planned 10,000 person Satmar wedding. Here’s why.

Beth Emeth lists Oct. 28 live-streamed ‘Lunch and Learn.’ It will review  what it means to be ‘The Other’