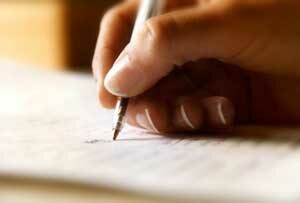 One suggestion for marking the Day of Atonement is  to write down  and reflect on one’s intentions for the new year. Photo courtesy of Vikas Kumar/EyeEm/Getty Images.

By ARIELLE KAPLAN
(Alma via JTA) – Much to my mother’s dismay, I’m not fasting on Yom Kippur and I’m not going to synagogue. Why? Because I don’t believe in God. But despite my lack of faith in a higher being, I take the High Holidays very seriously.

For those who need a refresher, here’s a crash course.

On Rosh Hashanah, as the story goes, Jews are inscribed in one of three books: the Book of Life for heavenly saints, the Book of Death for toxic people; and a temporary “in between” book for the rest of us who have nine days to repent for our sins before our fate is sealed on Yom Kippur.

Making It Meaningful For Me
As much as I want to believe that these books are real, I don’t (for the record, I’d totally be in the in-between one). But that doesn’t stop me from taking advantage of the holiday and making amends with those I wronged. Apologizing to someone, whether it’s a guy I ghosted or a friend I hurt, is uncomfortable and easy to avoid. That’s why I love Yom Kippur; it nudges me to reflect on my behavior and confront issues I’ve pushed away.

Skipping Kol Nidre and eating on Yom Kippur doesn’t make you a bad Jew, and there are plenty of other ways to make the holiday more meaningful to you. I asked a handful of people how they plan on observing the Day of Atonement without fasting or praying, and here’s what they said.

Reflecting, Reaching Out
“Growing up, I felt really out of place at synagogue. I wanted to do the kids’ services, or I’d try to hide in the bathroom. Yom Kippur was always a tough one to sit through, so I found other ways to celebrate. I find that reflecting and reaching out to people is very rewarding. I think that’s the main point of the holidays. I also make new goals for the start of the year and figure out how I can be a better person to others.”

“Since finding my current spiritual community, I attend services. However, before that I would try to volunteer, or write letters to everyone I’d fallen out of touch with, or write a list of ways I was going to forgive myself and a vision board for what I hoped the next year would look like.”

“I definitely like to write down my intentions on Yom Kippur. They’re more spiritual than my ‘resolutions’ for the regular new year. Those are more goal-oriented. It really has to do with the time of year for me rather than the holiday itself, since this time is arguably the beginning of the rebirth of the natural world and there’s something very renewing about the energy, and I like to tap into that. For the new year, my intentions are more powered by self-motivation and looking to get out of the ‘winter blues.’”

“I’ve made my own little tradition of using the day of Yom Kippur to take a walk to my favorite park with a journal and write down some intentions for the new year. I’ve also been sending out a mass email to all my friends sort of announcing my intentions and updating them on the past year (it’s a lot funnier than it sounds) and I’ve found it’s really helpful in holding myself accountable.”

A Serious Mindful Day
“Since I don’t belong to a temple anymore, I use Yom Kippur as a day to reflect and think about how I’m going to act differently over the coming year. On the regular New Year, my resolutions tend to be focused on diet, exercise and my career, but for the Jewish one they’re more serious. I think about being more mindful, taking care of my mental health and treating people with respect.”

“I don’t feel a spiritual connection at synagogue unless I’m with my family in my hometown. On Rosh Hashanah I went to a beautiful synagogue with my aunt, but it just wasn’t meaningful. In the past, I haven’t fasted on Yom Kippur because it always fell on a big tailgate weekend in college, so I’m not accustomed to doing it. Instead of partying this year, I’m still not going to fast, but I’m taking a day off from work to reflect on the past year and repent for my sins by reaching out to people.”

“One time I apologized to a friend on Yom Kippur for bullying her in middle school, but I haven’t reached out to anyone since then. I make resolutions for the year, and while my January resolutions are about living a better life, I like to focus my Rosh Hashanah and Yom Kippur intentions on being a better person. Like gossiping less and being more considerate than judgmental.”

Arielle Kaplan is an editorial assistant at Alma.