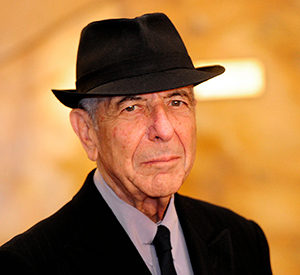 NEW YORK CITY (JTA) — After more than a dozen albums and a little more than a year after his death, singer-songwriter Leonard Cohen won his first Grammy.

The winning tune is the title track from his final album, “You Want It Darker,” which was released 19 days before his death in the fall of 2016. The song also happens to be one of Cohen’s Jewish-related performances, including Hebrew phrases (“Hineni, hineni,” or “Here I am”) and chants from the choir of the Shaar Hashomayim synagogue in Montreal, Cohen’s hometown.

Cohen was not the only Jewish performer to earn a posthumous Grammy: Actress Carrie Fisher won best spoken word album for “The Princess Diarist,” the audiobook version of her memoir released just weeks before her sudden death at 60 in December 2016. Fisher portrayed Princess Leia in the “Star Wars” series.

There were other Jewish moments, too. Singer-songwriter Lisa Loeb won best children’s album for “Feel What U Feel,” her fourth record of children’s music, and Jewish composer Justin Hurwitz won best soundtrack for visual media for his work on the Oscar-winning film “La La Land.”

During the show, the Jewish actor and singer Ben Platt performed a touching tribute to 21-time Grammy winner Leonard Bernstein. Platt, who originated the role of the title character in the Broadway hit “Dear Evan Hansen,” performed “Somewhere” from Bernstein’s “West Side Story.” The album “Leonard Bernstein – The Composer,” won a Grammy for best historical album.