Let’s talk truthfully about the issues behind mass shootings 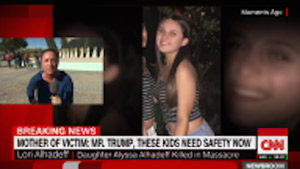 By JONATHAN S. TOBIN (JNS)  – Jewish groups don’t hesitate to weigh in after the mass shooting at a high school in Parkland, Fla., but the futile nature of the discussion about guns points toward more culture-war bitterness rather than solutions.

When Lori Alhadeff screamed at a camera from CNN and demanded that President Trump, “Please do something, do something, action, we need it now,” Americans instinctively sympathized with the grieving parent. Her 14-year-old daughter, Alyssa, was one of 17 people and five Jews killed at Marjory Stoneman Douglas High School , the latest in a series of gruesome mass shootings that have occurred in the United States.

What Can Be Done?
Alhadeff was not alone in her plea. Many leading Jewish groups like the Anti-Defamation League and the Religious Action Center for Reform Judaism, which have long supported tougher gun laws, joined her in the demand for action.

But as troubling as these shootings are—and as overwhelmed as the nation is by the grief and worry all parents share about the possibility of another similar incident—the prospects for “action” to prevent their recurrence are slim. More importantly, if we’re really being honest, we’d admit that the “action” Jewish groups and others are calling for a reluctant Trump and Congress to take wouldn’t do much, or even anything, to prevent such horror from happening again.

That is not a very popular thing to say right now, but it is nonetheless true.

The Weapons Are Available
While the world points to America’s unique Second Amendment protections for gun rights as being at fault, the rate of crimes committed with such weapons has gone down precipitately in the last quarter century. Mass shootings, however, have increased. The reason for that is, as David French pointed out in National Review, that such horrors are “the most premeditated of crimes,” planned out far in advance. Someone mad enough to carry out such an atrocity will always find a way to get weapons and the ammunition they need.

Almost all of the weapons used in these crimes were purchased legally, meaning more background checks—the most popular of the “common sense” reforms that gun-control advocates champion—wouldn’t have done anything to prevent mass shootings.

Banning AR-15 rifles—the weapon used in the crime and in some of the other mass shootings—or other so-called assault weapons is a gesture that would at least have the virtue of making many Americans feel better. But with more than 5 million AR-15s alone already in circulation as of two years ago, and with an estimated 1 million assault weapons being sold every year in the United States, the notion that shooters would be prevented from using one or modifying an existing legal rifle to make them more lethal is simply not plausible.

Repeal The Second Amendment?
These inconvenient facts point to the basic conundrum few of us want to acknowledge. In a country in which there are as many, if not more, firearms than people, the measures that Jewish groups are demanding be put into law are meaningless gestures, not serious proposals that might prevent another massacre. As long as gun ownership is a right enshrined in the Constitution, no “common sense” measure that only serves to make it more difficult for honest citizens to purchase a weapon will stop a mass shooting or limit the casualties in any meaningful way.

That means if you want to do something about the availability of guns in the United States, you need to repeal the Second Amendment, and make the possession of firearms illegal under any but the most limited circumstances. That—and not the endless back-and-forth about assault weapons, magazines and background checks—is the only honest debate to be had on the issue.

Yet Jewish groups, liberals or Democrats who share those views don’t have the courage to initiate such a discussion because they know it’s a non-starter.

Cultural Divide
The plain fact is that the divide in the United States about guns is largely cultural, rather than political. Much of the country thinks of weapons as a natural part of normal life. Cultural liberals, who are congregated on both coasts and in urban areas, regard guns with disgust. That Jews are disproportionately represented among the latter group is understandable, but it doesn’t make their proposals an easier sell among the rest of the country, who think of gun rights as morally equivalent to and indeed necessary for the protection of their other constitutional rights. Culture warriors may relish highlighting this chasm, but that won’t do anything to save lives or comfort the mourners.

So until we are prepared to have a debate about the Second Amendment, discourse about gun control will remain so much hot air and posturing, and not the principled politics those who make such pronouncements pretend them to be.

Mental Heath Issues
In the meantime, we’d do well not to dismiss calls to put more effort into addressing mental-health issues. We also need to understand that each mass shooting seems to build on the previous one; disturbed individuals have come to see them as a natural outlet for their inner demons. As a society, we must start taking responsibility for our neighbors and speaking out when problems present themselves. And, although nothing can make them invulnerable, schools must be made more safe and secure places for our nation’s children.

A Jewish community that wishes to comfort Lori Alhadeff and the others who have lost children and loved ones should start by being honest about the cultural divide in America about guns, as well as the need to avoid facile rhetorical gestures that don’t do anything to protect our kids.

Jonathan S. Tobin is editor in chief of JNS — the Jewish News Syndicate. Follow him on Twitter at: @jonathans_tobin.