Levy family to host screening of  “Heading Home: A Tale of Team Israel” 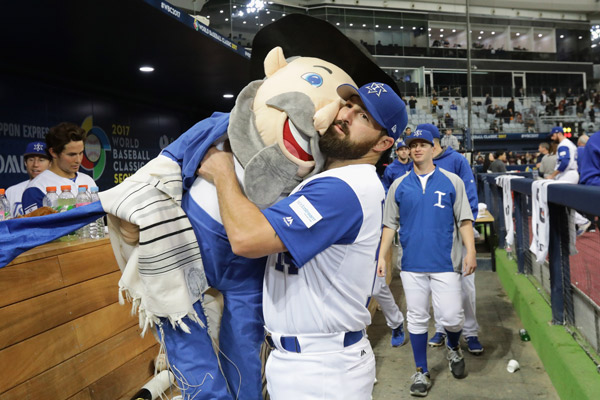 Ball player Cody Decker with the Team Israel mascot as seen in the documentary “Heading Home: A Tale of Team Israel.”

A free screening of the film “Heading Home: A Tale of Team Israel” is set for The Jewish Federation of Northeastern NY building, 184 Washington Ave. Ext., Albany  on Wednesday evening, Jan. 30,  at  7 p.m. The documentary, sponsored by the Levy family is in memory of Chaim Levy.

“Heading Home: A Tale of Team Israel” a story of sports, patriotism and personal growth, charts the underdog journey of Israel’s national baseball team competing for the first time in the World Baseball Classic. The team had finally ranked among the world’s best in 2017 and was eligible to compete in the international tournament. The team’s line-up included several Jewish American Major League players―Ike Davis, Josh Zeid and ex-Braves catcher Ryan Lavarnway. Most had a tenuous relationship to Judaism.  Several had never set foot in Israel. With their Mensch on the Bench mascot by their side, the team laughs, cries, and does much soul-searching, discovering the pride of representing Israel on the world stage, according to organizers of the program.

While there is no cost to attend, donations will be accepted and will be sent to Jewish Family and Children Services to support the Jewish community of Pittsburgh, Penn. and the JFCS Refugee and Immigrant Services.

Reservations are requested and may be made by calling The Massry Residence at 518-689-0453.

The Levy family is sponsoring the screening of the film in memory of Chaim Levy who succumbed to ALS. According to his children, when people would visit Chaim, he would tell them, “I came to this country at the age of 12. I fell in love with baseball and so fell in love with America. Baseball is what made me an American.”

Rabbi Miriam Lichtenfeld to review Jews and the environment at Agudat Achim
Carol Channing, the original star of ‘Hello Dolly!,’ dies at 97