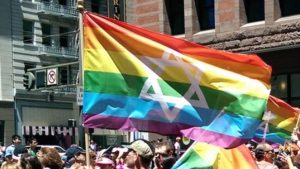 By BEN SALES
NEW YORK CITY (JTA) – For years, Laurie Grauer had waved a rainbow flag emblazoned with a Jewish star at the Chicago Dyke March, sometimes marching near activists waving Palestinian flags. It had never been a problem.

But this year, Grauer was confronted by the LGBT parade’s organizers, questioned about her support for Israel and asked to leave because she was carrying the flag. She was one of three women with Jewish flags kicked out of the parade on Sunday, June 25.

Condemned For Identity?
Grauer says she was used to Israel being a sensitive issue in queer spaces. But she did not expect to be condemned for displaying her Jewish identity.

“To say that you can only identify one way is very dangerous,” said Grauer, the Midwest manager for A Wider Bridge, a pro-Israel LGBT group. “Here you have this march that is supposed to be something for people that feel oppressed, invisible, marginalized, [where] they can be who they are. I wasn’t pushing my views on people and was told the way you’re expressing yourself is unacceptable.”

The incident at the Dyke March was just the latest in a series of clashes over Israel at activist events for the Lesbian, Gay Bisexual and Transgender, or LGBT, community. Being pro-Israel at LGBT events has become difficult, LGBT Jewish leaders say, and at times the opposition to Israel has spilled over into making Jews feel uncomfortable about displaying their identity.

Incidents Increasing
Similar tensions arose earlier in June at the Celebrate Israel Parade in New York City, where activists from the far-left Jewish Voice for Peace infiltrated the parade delegation of Jewish Queer Youth, an LGBT group, and held anti-Israel banners. One of the protesters said he was there to “counter Israel’s pinkwashing”—that is, to stop the pro-Israel LGBT group from using Israel’s relatively progressive attitudes to distract from the Palestinian issue.

Last year, an event featuring an Israeli group at an LGBT conference in Chicago was canceled, then reinstated, and took place amid vocal protest.

Nor are these debates new. In 2011, New York City’s LGBT Community Center agreed to lease space to Queers Against Israeli Apartheid, leading gay adult film star and pro-Israel activist Michael Lucas to call for a boycott of the center. The center relented, opting not to host any groups connected to the Israeli-Palestinian conflict.

“We’ve seen that in a number of different settings, these kinds of incidents have absolutely been increasing in frequency,” said Idit Klein, executive director of Keshet, an LGBT Jewish organization.

“Complexity Of The History” Ignored
LGBT community is “more likely to be sensitive to and have empathy with others who experience oppression and discrimination. People see injustices being perpetrated against Palestinians by the Israeli government,” she said. “Many don’t necessarily understand the complexity of the history.”

Several Jewish groups have called on the Dyke March to apologize for expelling the activists, but march organizers are standing by their decision. In a statement Sunday, they said the women were expelled because they were pro-Israel activists and the march is anti-Zionist.

The statement noted that Grauer was a member of A Wider Bridge, which the Dyke March called “an organization with connections to the Israeli state and right-wing pro-Israel interest groups.” It also accused Israel of pinkwashing.

Not all Jews have condemned the march for excluding the Jewish women. Jewish Voice for Peace, the group that infiltrated the Celebrate Israel Parade and a backer of the anti-Israel Boycott, Divestment and Sanctions movement, tweeted its support of the expulsion.

Decline Of Civil Discourse?
Klein said the tensions over Israel in the broader LGBT community also exist within the LGBT Jewish community. Conversations over Israel in that context become increasingly touchy because people connect their stances on Israel with their overlapping identities.

“There’s an extra layer of identification as a group that experiences injustice, so that adds a layer of intensity,” the Keshet leader said. “It makes it a struggle to enable people to be in one space together. I haven’t figured it out and nor has anyone else.”

“It’s become less respectful, more with a tremendous character assassination, and that deeply saddens me,” Kleinbaum said. “The larger political world has become that way. Social media has created a platform for people who don’t care about nuance.”

Three years ago Kleinbaum’s synagogue, which regularly joins the Celebrate Israel Parade, faced criticism from some of its pro-Israel members for its sympathy to the Palestinians and criticism of Israeli policy.

And if it is not just the left, it’s not just Israel either, said Mordechai Levovitz, executive director of Jewish Queer Youth. He’s seen people berated or excluded from activist circles because they are politically conservative or too openly religious. Israel is doubly complicated, he added, because it connects both to a political issue and ethnic identity.

“This is rooted in an approach that’s all about shutting other people down instead of hearing people who disagree with your point of view,” Levovitz said. “Israel is a very complex issue for Jews because it doesn’t have to do with a state’s policy, it has to do with your identity. How can you say you can have pride in one aspect of your identity but not the other?”

Anti-Semitic Or Ignorant?
Jewish LGBT leaders hope they can stem these trends through dialogue and explanation, distinguishing Israel’s politics from the nation’s right to exist, and Israel from Judaism. Kleinbaum will attend a roundtable of LGBT leaders across communities where she will share her personal experience regarding Israel.

“People are behaving in an anti-Semitic way without knowing that’s what they’re doing,” said Lilli Kornblum, past president of Or Chadash, a former LGBT synagogue in Chicago. “They may be more open to understanding the nuances of the community. My goal between now and next year’s Dyke March is we’ve got a year to sit down and talk about this. I’m much more likely now to go” to the march next year.

In the meantime, the women who were kicked out of the march have said they feel anguished. But Grauer said that although she was pained by the incident, she has been supported by activists from across the wider LGBT community.

Does Feminism Have Room for Zionists?
A new website aims to bring Jew-ish millennial women together